Home on the Range Again by Leigh Riker 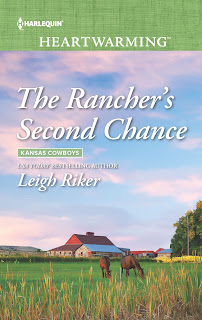 Hi, all. I’m excited to “talk” about THE RANCHER’S SECOND CHANCE today. Which seems like Fate or something. Because this happens to be the actual release day for the latest in my Kansas Cowboys miniseries. In a nutshell…

He wants his ranch back…She won’t give it up.

That reminds me of some sage advice from author Sandra Brown who once said, “If he’s a firefighter, she’d better be an arsonist.” Getting the conflict right out there makes the writing easier!

Nell Sutherland, a born cowgirl, appeared in HER COWBOY SHERIFF, and was one of those characters who, as soon as she walked into Annabelle’s Diner, demanded her own book. Lucky for her, so did Cooper Ransom, a tough ex-Chicago cop who returns to their Kansas hometown to buy back the land he lost years ago to Nell’s grandfather. He also lost Nell too then, so…a second chance romance.

Believe me, nobody gets in Nell’s way. Yet how can she prove to her absent grandfather that she’s fully capable of running his ranch, which she hopes to inherit? A pack of coyotes has been killing his cattle, but Nell hasn’t caught them, and she lives in a man’s world where no one seems to think she can do the job.

Here’s a brief, edited excerpt in which Cooper, the new foreman (Nell wants to keep her enemy close), plans to ride out with some other local ranchers to take care of the coyotes. Nell assumes she’s not included and seems to be losing ground:

The other night she’d let Cooper kiss her, then kissed him back. They hadn’t been friendly, let’s-be-pals kisses; they’d ignited a slow fire inside her that wouldn’t seem to burn itself out. A small spat now seemed wiser than letting her awareness of him go any further. “I won’t stay home like a good girl making sandwiches for the vigilante group you’ve put together. Letting you men have all the fun.”

“I know others have questioned your ability, your authority, but this isn’t about who gets to play.” His eyes were the gray of the fog that often covered the hill this time of year. Way too attractive. “It’s about finding those coyotes and stopping them from doing worse.”

“I don’t work for you, Cooper.” She rushed on before he could speak. “You work for me—and either you stay here to do whatever I need you to do or I ride with you…If you don’t get my point, I can fire you this minute.”

Cooper propped both hands on his hips. “You keep threatening to do that. So do it. Right now, or don’t say it again.”

Moving fast, Nell forced him to back up against the table behind him. “I’m the boss here.” Even to her own ears, she sounded breathless. First, she’d had PawPaw [her grandfather] to deal with, Hadley [her ex-foreman] then Jesse [her brother] and now Cooper.

“I dare you,” he said. His eyes were steady on hers, and his mouth seemed ever closer…too close.

Nell tried to catch her breath. Long ago, Cooper had charmed her, wooed her, taken her down into this same slow spiral of need.

“Nell,” he said. “If you’d let me finish what I was trying to say, I would have told you no one is cutting you out. I want you to come along.”

His words surprised Nell, but all thought was lost when his strong arms came around her and they shared another, unexpected kiss that seemed to never end.

She didn’t want it to, even when he murmured against her lips, “You didn’t fire me. That’s the end of it.”

It isn’t, of course, but clearly, Nell has met her match. Have you ever gotten a second chance with that special guy who got away?

I hope you enjoy THE RANCHER’S SECOND CHANCE. And in October, TWINS UNDER THE TREE, the next in the series, will arrive. Happy reading!