Sit Down Saturday with Jeannie Watt

Posted by Jeannie Watt on February 08, 2020
Hello everyone! I hope you're having a great February!

I'm so excited about the new Heartwarming covers that debuted this month. The artwork is amazing and  I'm thrilled with the cover for Montana Dad. It totally captures the relationship between my hero, Nick Callahan, and his two little girls, Kendra and Bailey. 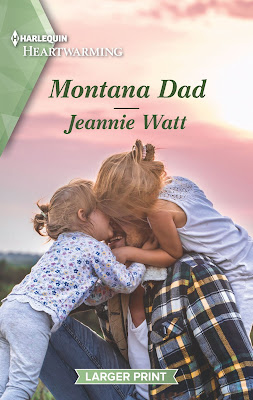 Montana Dad is book two of my Sweet Home Montana series, and it's a multi-generational story with a feisty grandmother, a somewhat cantankerous older rancher who is butting his nose into her business a little too often for her liking, my hero and heroine, and the hero's kids.

Nick Callahan lost his wife eighteen months ago and has sold his California construction business and moved home to the ranch he grew up on in Montana so that his girls can be closer to his grandmother and sister. The bridge to his ranch washed out during spring floods and he needs to access his ranch through the new neighbor's property until the bridge can be repaired. The neighbor says no.

Alex Ryan is in Montana hiding from people who think she might be involved in a major theft at her former company. She's nervous and on edge and the last thing she wants is to have someone driving through her property when she's trying to remain invisible.


Alex Ryan climbed out of her car and stalked toward Nick with murder in her eyes. Apparently he had something to answer for, which was odd, because wasn’t he the one getting screwed over in this deal? Wasn’t he the one who quite literally had to traverse ten miles of bad road to get home?
She came to a stop a few feet away and pointed a finger at him. “You had me blackballed at the lumber store.”
“Cooper’s Building Supply?”
“Yes.”
“I didn’t.”
She gave him a puh-leeze look as her green gaze burned into him. “I’ll drive to Missoula to get what I need. And you can enjoy the fact that you’re putting me out, but remember this—petty revenge is bad for the soul.”
“I’ll remember that when I take the ten-mile detour to my ranch.” He folded his arms over his chest and looked down at her. Steam was practically coming out of her ears. “And if I engaged in vengeful behavior, it’d be a lot more creative than having someone blackballed at Cooper’s.” His voice was little more than a growl, but it must have carried, because he heard the wheels of a grocery cart come to an abrupt halt behind him, then start moving again.
“People are looking,” Alex said in a hissing whisper.
“Of course they’re looking. Wouldn’t you?” He glanced over to see Mary Watkins and her three kids staring at them as they loaded their SUV with groceries. And the cart that had stopped so abruptly behind him was being pushed by Lester Granger, who would totally enjoy spreading this tale at the co-op coffee klatch. Nick smiled tightly and raised a hand at his neighbors.
Nothing to see here, folks.
Mary waved back.
When Nick shifted his attention back to Alex, she let out a breath that seemed to come from her toes. “I need to go.”
The expression she’d worn when he’d come to her ranch that first day was back. Half cautious, half defiant. Fully self-protective. What was this woman running from? Was she a criminal? An abused wife on the run? His gaze strayed to her ring finger, which was bare and showed no signs of a ring having been recently removed. Okay, probably not married, but one didn’t need to be married to be abused, and she was as jumpy as he would expect an abuse victim to be. She’d asked him not to judge until he knew her circumstances. Fair enough. Of course, it’d be nice if she explained her circumstances, but he didn’t see that happening anytime soon.
“I’ll talk to Emmie at the building-supply store.”
“I…” She swallowed, obviously not expecting the gesture. “Thank you.” It was as if politeness was so deeply engrained in her that now that her anger had faded, she couldn’t simply get in the car and slam the door like she so obviously wanted to.
“You’re welcome,” he replied. She was there, living on the property he’d wanted, and avoiding her wasn’t going to change the situation. “What did you need at the building supply?”
“A hinge. I’m fostering a dog. I have to have a secure enclosure.”

The book is available on Amazon, Barnes and Noble, Kobo, Google Play and Apple.
Also, if you'd like updates on my books, please consider joining my newsletter. You can sign up on my webpage.