Posted by Amie Denman on June 06, 2020
Hello, Readers,
Thank you for checking in to hear about my new release this week A Home for the Firefighter. 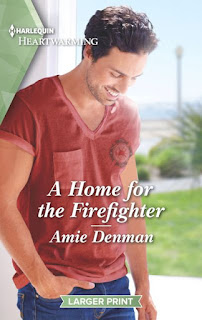 This is the third and (maybe??) final book in my Cape Pursuit Firefighters series with Harlequin Heartwarming, although I never say never. I always love writing about firefighters, so I'm leaving the door open to come back and hang around the fire department in the beach town of Cape Pursuit, Virginia. If you've read the books, you might recognize that beach town--it's modeled after Virginia Beach where my family has spent several lovely vacations. I treasure the pictures of our two sons covered in sand on the beach, smiling from ear to ear.

I'm including an excerpt from A Home for the Firefighter for you to enjoy, but first an announcement.

Just yesterday, I signed the contract for two more books with Harlequin Heartwarming!

These romances take place on an island, and I hope it will be a place you'll want to visit! Those books won't release until Summer and Christmas, 2021, and I'm already looking forward to sharing them with you.

Here's that excerpt from A Home for the Firefighter:

A string of tall hotels with balconies and beach views lined the waterfront in Cape Pursuit, and the strip of road behind the hotels was the flashy area of tourist dining, entertainment and shopping. Restaurants, bars, miniature golf courses, stores selling beach blankets and sunscreen and upscale shops selling art made the downtown area inviting well beyond the beach. Brady slowed for a tourist on a bicycle who weaved down the side of the street. He wasn’t in a huge hurry, and if a call did come in he could flip on the lights and siren. Safety came first, though. Always.

The wandering bicyclist turned at a stop sign, and Brady came to a full stop with the massive fire engine. Facing him at the four-way stop was the Cape Pursuit sightseeing trolley. The glorified bus painted and styled to look like an old-fashioned trolley car was a familiar sight in the tourist town. There were several of them, and they ran a daily circuit through Cape Pursuit, providing a way for visitors to hop on and off at hotels, restaurants and several locations along the beach. The longer runs took visitors up the coastline to Norfolk and destinations along the way.

Brady knew most of the trolley drivers and had, in fact, spent the previous summer making extra cash driving one. He was planning another summer of the same trolley shifts mixed with fire station shifts. With another summer of working two jobs, he could finally put away enough savings to make a down payment on his dream of home ownership.

He waved automatically to the driver of the trolley as he always did, but she didn’t seem to notice him as she turned to say something to a passenger in the front seat.

It was only a glance.

He could be wrong.

But that driver looked just like Kate Price, who had kissed him and left without a word at the end of the previous summer. There was no way she could be back for another summer…was there?