Christmas in September--ALL THEY WANT FOR CHRISTMAS

When Harlequin informed me that my release month for my Christmas book was September, I thought no one would be interested. September is for new beginnings yes, but not to celebrate Christ's birthday. I was wrong. A lot of people secretly long for Christmas all year long, and my early release gives them the perfect excuse to indulge themselves.

I had the opportunity to write the story during winter, so I didn't have to imagine the cold temps, the powdery fall of snow, the slide of hot chocolate...and that bit about the clear, windswept ice really did happen one year on the lake. 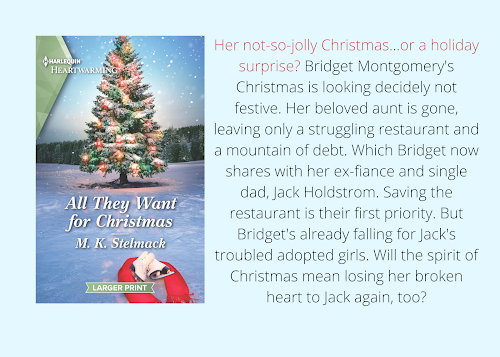 I'd also like to share an excerpt with you. This scene between Jack and Bridget comes after a successful launch of their Christmas weekend dinner services. Alone together in the quiet of the restaurant, Jack sets a challenge before Bridget:

Jack returned with a tin box and set it on the counter. It was the one Auntie Penny had kept in her office filled with buttons and loyalty cards and gift cards with little or no balances. Jack flipped open the lid and Bridget saw he’d chucked the lot and replaced it with a wad of cash. “Tips. From last week’s service.”

“All that? I add mine into the deposits. How did you separate it out?”

“Yours? Wow. I’m not the only one who thought you looked sensational in that shirt this weekend.” He’d worn a soft cotton shirt that had set off his tan and made his blue eyes pop.

Those eyes gleamed. “I didn’t know you thought that.”

Bridget got busy placing a fork and knife just so on the white napkin. “I said you looked good.”

“Yeah, but not sen-sa-tional. And I don’t wear that shirt in the morning, when I pick tips up like crumbs off toast. Sofia and Isabella rake in a lot for me. Customers see me as this hardworking single dad, just trying to get by in a woman’s world.”

Bridget snorted. “It’s Marlene, isn’t it? You run over like a happy dog with her coffee and cinnamon bun.”

“Mel and Daphne, both. They’ve got their own nieces and nephews to spoil.”

“Hey, are we really going to complain that they willingly give us their money?”

Bridget waggled a freshly wrapped fork and knife at him. “Sounds like charity to me.”

“It’s charity disguised as payment for a service.”

“What it is,” he said, “is a tiny rainy-day fund for us to build on to cover payments in January when business tapers off.”

“Um, I don’t know that your tips—as great as they are—will take us over the top,” Bridget said.

“No, but I figure it’ll be enough for us to get by until we sell the units.”

Bridget’s heart struck a few downward beats. “Have Mara and Krista decided not to take them?”

“They haven’t said one way or another, probably because they know how upset you’ll be when they decline.”

Bridget would be sad. But it would also be a relief not to worry every second about how to make ends meet. Jack gave a small, secretive smile. “Until then, you’ve no idea what a table full of tipsy ladies will pay for my charms.”

“I thought you were laying it on a bit thick the other night.”

Jack leaned on the counter. “Not jealous were you, Bridget?”

“No,” she said quickly. Too quickly. At his knowing grin, she added, “Okay, a little. Of your tips.”

“Don’t be,” he said. “Your talents probably lie in other areas.”

She feinted a poke at him with a fork. “Are you implying that I can’t bring in the tips?”

He shrugged as if to imply just that.

“You are on, Jack Holdstrom. You are so on. Starting tomorrow with Monday’s breakfast and ending next Saturday closing.”

“What does the winner get?” Jack said. Oh. He was getting that later glint in his eye.

“Boring. I could get those any day of the week.”

“If I win, you have to come skating with me.”

That was a no-brainer. She loved to skate and she’d not been out all year. “Fine. I’ve been meaning to take the girls to the lake, anyway.”

“No, Bridget,” he said and leaned on the counter, his lips inches from hers. “Just you and me.”

And a whole bunch of other people in a public area. “Okay,” she said, and tried to move on quickly. “And if I win, you have to serve me dinner. Tablecloth, napkins, wine—the whole shebang. Like we’re at a fancy restaurant.”

His lips remained close to hers. “Will you dress up for it?”

Bridget's heart rattled like a lid on a boiling pot. “Yeah, sure, why not? Can I bring a date?”

The glint flickered into a heated glow. “That won’t work. I’m only serving you.”

“Maybe I should adjust the bet.”

Jack straightened. “Too late. If I win, you and me go dating…I mean, skating together. Sorry for the slip of the tongue,” he said unapologetically. “And if I lose, I serve you dinner after hours, the two of us alone, you and me all spiffy, as if we’re on—”

“Don’t even say it,” Bridget said.

“I don’t think I need to,” Jack said and whistled a short, gotcha tune. “Win or lose, I’m going on a date with you.”

I have a couple more excerpts on my website
I am also going to include a link to Harlequin where ALL THEY WANT FOR CHRISTMAS is currently 20% off: Harlequin
Also check out reviews on Goodreads through the above link.
Treat yourself to a little Christmas in September!
Happy reading, everyone!