The Promise of Rain By Rula Sinara 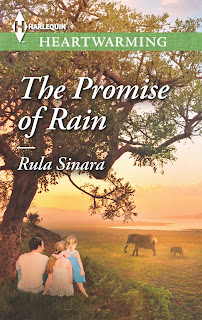 I can't believe Thanksgiving is only two weeks away! It's the ultimate holiday for kicking off an entire season that revolves around love, family and giving. A season that leads up to the start of a new year. In a perfect world, the love, giving and closeness of family would last all year long, not just during the holiday season, but still...I think it's symbolic that my debut, The Promise of Rain, is a January release. It's a story that centers around forgiveness, sacrifice and sometimes misguided selflessness. Families torn apart by trauma and the struggle to rebuild those relationships is a prominent theme in The Promise of Rain, so it's perfect that the cover captures the sense of serentity, family and happily ever after that the characters almost miss out on. And those characters include 'heartwarming' little ones like the baby elephant you see in the background and the little girl, Pippa.

My heroine, wildlife veterinarian Dr. Anna Bekker, is a giver and if there's one thing she knows it's that the emotions and values that bind families...things like nurturing love, mourning, worry and joy...aren't limited to humans. She has witnessed, first hand, those very emotions in the African elephants she's trying to save through both research and by rescuing babies orphaned by poachers. One little male elephant in particular steals her heart and I can only hope readers are taken by him as well.

I'm thankful for everyone who spreads kindness and compassion in our world. I'm thankful for everyone who reaches out in their own way and who raise awareness. It's not always about money, although Dr. Bekker's research and orphanage camp in Kenya's Serengeti is being threatened by funding cuts...cuts that are pushed forward by hero Dr. Jack Harper. Sometimes the eye of a photographer or artist touches the heart.


And another one I love by the same photographer... 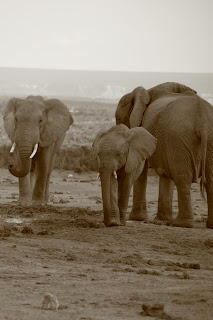 What are you thankful for this year?

He wants to take her child out of Africa...

The Busara elephant research and rescue camp on Kenya's Serengeti is Anna Bekker's life's work. And it's the last place she thought she'd run into Dr. Jackson Harper. As soon as he sets eyes on her four-year-old, Pippa, Anna knows he'll never leave...without his daughter.

Furious doesn't begin to describe how Jack feels. How could Anna keep this from him? He has to get his child back to the States. Yet as angry as he is with Anna, they still have a bond. But can it endure, despite the ocean--and the little girl--between them?