Can You Spot the Difference? ...by Kate James

Do the two pictures above look the same to you? Since I'm reasonably certain that your answer is—being as polite as possible—no, this post is the story of how a lovable Irish Wolfhound mix morphed into an equally lovable black Labrador Retriever in my recent release, The Truth About Hope.

I'm very fortunate to have Paula Eykelhof as my editor. She is exceptional at what she does, I value all her revision requests and—as a bonus—she has a terrific sense of humor. We share a love of animals, and early in our working relationship we discovered that one of her cats and one of our black Labradors have the same name: Logan. We affectionately refer to them as FL (feline Logan) and CL (canine Logan). Occasionally, we exchange cute anecdotes about their mischief. This is backstory to the revision I had to make to my May release, The Truth About Hope.

In the original manuscript, my heroine, Hope Wilson, has a large, gangly, good-natured mutt that resembles an Irish Wolfhound. The scene when she finds him as a puppy, as originally written, follows.


*
Crouching down, Hope cautiously pushed aside a large branch to have a look…and started to laugh. Unmindful of the damp grass, she fell to her knees. Still laughing, she reached under the base of the bush and hauled out a squirming, wiggling, mud-covered puppy. “What are you doing here?” she inquired of the little dog.
The puppy mewed and continued to wriggle. Hope leaned in to nuzzle him and pulled back quickly. “Wow! What they say about sweet puppy breath doesn’t apply to you, does it? You stink! I bet that’s more than just mud covering you.”
In response, he slathered Hope’s face with his tongue, landing one grimy paw on her white shirt and another on her cheek. “Thanks, pal,” Hope exclaimed. She swiped her upper arm across her face, smearing the mud.
“I have our refreshments,” Priscilla announced as she emerged from the house carrying a tray laden with a pitcher, glasses and a plate of sliced lemons. She almost dropped the tray when she noticed Hope kneeling on the grass. Depositing it on the patio table with a clatter, she rushed over. “Oh, I’m so sorry. Let me take him.” She made a grab for the puppy, but Hope drew him back, streaking more dirt on her shirt and along her arms.
“Look at you! You’re covered in dirt,” Priscilla exclaimed. “Morris was supposed to have taken that little dog to the pound a week ago.”
Hope’s eyes rounded, and she tightened her hold on the puppy. “To the pound?”
“Well, we didn’t want to. Morris and I thought it would be nice to have a dog around, but your father…”
“He didn’t want a dog,” Hope concluded.
Priscilla nodded.
“Where did he come from?”
The puppy in question enthusiastically licked the side of Hope’s neck.
“We have no idea. He just appeared a couple of weeks ago.”
Sinking back on her heels, Hope placed the puppy on the ground, where he executed a summersault in pursuit of his tail, before clambering onto her lap again. Hope nudged him, and he rolled over on his back, where he remained with an expectant look on his face. When Hope obliged with a tummy rub, his gleeful squeals stole her heart. “So, he doesn’t belong to anyone?” she asked.
“Not that we could determine.” Priscilla squatted down too and cautiously patted the pup on the top of his upside-down head.
Hope’s expression turned thoughtful. “My father asked me last night if there was anything he could do to make me feel more comfortable here.” She continued to rub the little dog’s belly, while he nipped at her fingers with his needle-sharp teeth. “I’ve always wanted a dog, but I couldn’t have one in Canyon Creek because Mom was allergic.  What if I told my father I wanted to keep the pup?”
Priscilla smiled. “There’s always a chance. Why don’t we take the little guy into the mudroom and get him cleaned up first? Make him more presentable.”
It took several cycles of lathering and rinsing until the bath water finally ran clear. The pup was still mostly gray, but the brown had washed away with the sudsy water to reveal a bright white belly and white boots on three of his paws.
“How big do you think he’ll get when he’s full grown?” Hope asked as she toweled him off.
Priscilla pursed her lips. “I’m no expert on dogs, but I’d say he’s a real mixture. His coloring and the shape of his face make me think he’s got some Irish Wolfhound in him. Judging by how big he is now, I’d say he’ll be mid-size. Probably fifty to sixty pounds when he’s full grown.”
“That’s not so big. My father wouldn’t object to me keeping him, if I promise to take care of him and keep him out of his way, would he?”
Before Priscilla could answer, the outside door swung open and Morris strode in, the screen door slamming behind him. He took one look at the two women, the little dog between them, and started to back out.
“Not so fast, Morris!” Priscilla called.
He stopped in his tracks, but kept his hand on the door handle.
The puppy—having aptly demonstrated his displeasure with the entire bathing process—must have seen his opportunity to escape. He squirmed out of Hope’s grasp and charged straight for the doorway, crashing head-first into the screen. Fortunately he bounced off it, landing ingloriously on his backside.
*


Imagine my surprise when I saw the cover and, rather than a Wolfhound, the dog featured prominently is most definitely a black Lab and looks exactly like our Logan, including the slightly curly fur along his back! 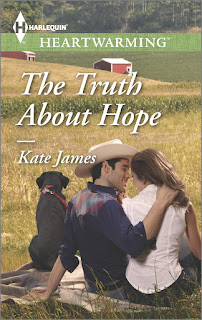 I had to edit all references to the dog, Einstein, to fit the cover image. For example, I revised the highlighted paragraph in the original manuscript to read as follows:

*
Priscilla pursed her lips. “I’m no expert on dogs, but the shape of his face makes me think he’s got some Irish Wolfhound in him, but the rest of him looks like all Labrador. If he’s mostly Lab, he won’t grow too large. Probably about sixty pounds when he’s full-grown.”
*

The net effect? I had to rewrite approximately a dozen scenes, Logan lorded it over our other Lab Harley, he wanted a share of the royalties in the form of extra kibble, and Harley now would like to know when he can expect to be a cover model, too. Considering there have been times when FL and CL have “used” our respective laptops, I have to wonder if there might have been a conspiracy involved! With this bit of backstory, I hope you enjoy getting to know Einstein, the mostly black Lab, in The Truth About Hope! (I do want to thank the art department team at Harlequin for how hard they work at creating the best possible covers.)

Still on the topic of dogs, my next three releases constitute my K-9 trilogy. The first two books, When the Right One Comes Along (October 1, 2015) and When Love Matters Most (January 1, 2016) are currently available for pre-order. Not surprisingly, there is a casts of furry, four-legged supporting characters in these books.

Do you feel furry, four-legged characters can enrich a story and help define the protagonists? What breed/type of dog would you like to see featured in a book and why? Leave a comment for a chance to win a copy of The Truth About Hope.