Sit Down Saturday with Syndi Powell 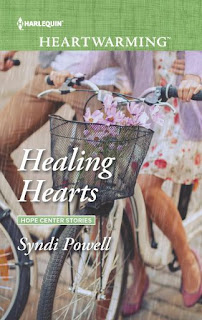 Syndi, can you tell us what this book is about?

Dr. April Sprader meets Zach Harrison, a sports agent, when he brings one of his clients into the ER where she works. She sees him as arrogant; he thinks she's pushy. Despite a bad first impression, they keep running into each other as April works on her Second Chance list. While she was fighting cancer, she made a list of things she would do once she was better. Now whether she's going salsa dancing, taking a cooking lesson or enjoying a wine tasting, Zach seems to be there. And maybe first impressions aren't always the best. As they get to know each other, Zach wonders if a romance between the two of them is just what this doctor ordered.

When I was going through treatment for breast cancer, I wrote down ideas of what I would do once I was better. Some of those eventually appeared on April's list, so I was able to live vicariously through her efforts.

April was such a fun character to write. She is so positive and bubbly in her outlook. While her friend Page might question some of her affirmations, April truly believes that staying positive will defeat anything including cancer. She also has a strong conviction that love conquers all. How can you not like someone like that?


What is your favorite scene?

It's hard to choose just one, but I think  it would be when April goes to a wine tasting as part of working on her list. Zach warns her to spit out the wine into the bucket rather than swallowing each sip she tries. Thinking it gross to spit, she drinks more wine than she should in a short amount of time. Poor Zach's shoes pay the price for her drinking.


This is the second book of a three book series. What does that mean to you?

When I see a book with my name on it, I feel so grateful to be given this chance to tell stories that occupy my heart. This is book #6 for me, and I hope to keep writing for many years to come. There's a lot more stories waiting to be told.


What's up next for you?

The last book in this series of Hope Center Stories, Finding Her Family, comes out July 1st. It's the story of Page Kosinski who is in the middle of cancer treatment when she meets a homeless pregnant teenager and calls up her friend Sherri's cousin Mateo to help her get custody of the girl. Together, they find that family doesn't always mean the one you were born into but is the one you create.

I'm also working on a proposal for another three book series about a family of Detroit police officers. So stay tuned!

Don't forget to sign up for our February Heartwarming Author contest below: