Dealing with UFOs by Jeannie Watt 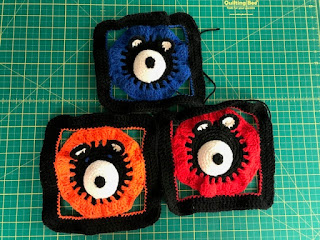 By UFOs, I do not mean spacecraft visiting Earth from distant galaxies, although that would be cool. I mean UnFinished Objects. Those handcrafted projects that get put aside when life intervenes. The quilt you’ll finish later. The afghan that needed a couple skeins of yarn. Things like that.

I moved from Nevada to Montana eighteen months ago and had to pack a small ranch. By the time I got to my sewing and handcrafts, I was at the point where I was dumping things into boxes all willie nillie, sealing them up,  slapping a few cryptic words on them I was certain I'd understand later. It was not a time to make big decisions. Those would come later.

The house is pretty much done. Most of the boxes are unpacked—except the sewing stuff. I’ve sewn a few things, but have been essentially working out of boxes. Now I need to put stuff away, which means confronting the UFOs.

There’s the bear afghan that I started when my son was 4. He’s now 31. I’m now aiming at a
grandchild, so I’ll be keeping this. The big pieces are done. It’s now a matter of sewing faces on bears and putting the squares together. 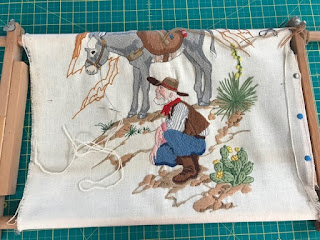 And then there's the crewel picture of a prospector. It made perfect sense in 1983 when I started it and my husband and I were both geologists working in the mining industry. Then we moved to Nevada and I had my first child and suddenly I had no time to sit and stitch. I recently tried to throw it away, but you know what? I think I’ll finish it. I loved our prospecting days. It'll only be a 35 year gap from start to finish.

Sometimes, it’s best to repurpose. I used to sew my husband’s shirts. He liked it because I could custom fit him. I found a blue chambray shirt I’d cut out and stuffed into a Ziploc bag. The fabric is lovely--crisp and cottony--but I did not feel like sewing a man’s shirt (shhh!). I hated to throw the fabric away, so instead, I found a woman’s pattern with similar pieces and cut that baby down. 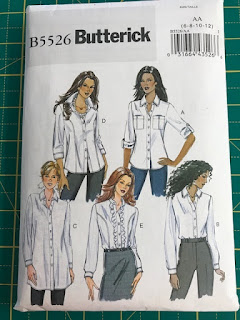 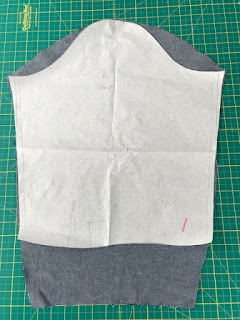 Now I have a shirt (or most of one--it still needs buttons) and I love it! Also, one line item deleted from the UFO list. 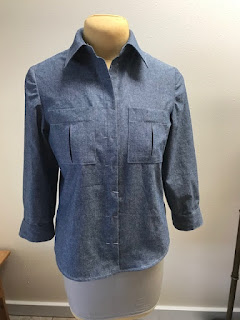 Truthfully? I haven't thrown one UFO away and I've promised myself that I will not buy fabric until I sew up the stuff I have. So far, so good.

Now I must ask--do you have UFOs ? What do you do with them? Keep them? Toss them? Reevaluate or repurpose? I’d love to know.