Sit down Saturday with Amie Denman 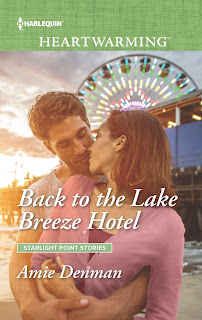 Today we’re celebrating the March release of Back to the Lake Breeze Hotel by Amie Denman.

So, Amie, where did you get the idea for this novel?
This is the 5th and final book in the Starlight Point series, and the idea for it has been in the back of my mind since I began the series. The driving force behind the first book in the series, Under the Boardwalk, was the unexpected passing of Ford Hamilton, the patriarch of the Starlight Point family. His three children each took on a leadership position in the family-owned amusement park, and their stories appeared in Under the Boardwalk, Carousel Nights, and Meet Me on the Midway. All along, though, widow Virginia Hamilton was a strong steady force in her children’s lives and in the life of Starlight Point. I thought she deserved her own happy ending, and I’m delighted she found love again five years after her husband passed away. Her romance is intertwined with the main characters Alice and Nate’s romance.

In looking at the cover, if you could add a caption or captions, what would they say?
The young lovers on this cover are Alice and Nate. It’s their second chance at love after Alice called off their wedding five years ago. In the beautiful sunset scene the wonderful cover artists at Harlequin have produced, you can just feel their joy at finding each other again.

What is your favorite scene?
Starlight Point, a summer resort and amusement park, decides to stay open for fall festivals and a winter and Christmas event. One of the attractions for the winter event is an old-fashioned ice skating rink. For promotional purposes, Alice and Nate dress in red and green and skate together. When the camera captures the expression of love on his face, it’s a turning point for their romance.

Who was your favorite character and why?
Virginia Hamilton has my heart. She lost her husband, kept going and devoted herself to her family and Starlight Point, and was brave enough to take a second chance on love when a wonderful man came along. I think she’s a hero!

What do you plan to work on next?
I’m working on a new series for Heartwarming called Cape Pursuit Firefighters. The first book, In Love with the Firefighter, comes out in July, and I hope several more will follow next year. I love firefighters, and I’ve created a fictional town on the Virginia coast with plenty of sunshine and romance.

Thanks for reading about my new release Back to the Lake Breeze Hotel. I hope you'll love it!

Amie Denman lives in Ohio and writes romances full of humor and heart. She loves wedding cake, show tunes, animals, kayaking, and chasing fire trucks on her bicycle. She has written more than twenty novels, all of them with a happy ending. Please visit her at www.amiedenman.com