Sit Down Saturday with Kim Findlay


Today we're celebrating the release of Crossing the Goal Line by Kim Findlay. 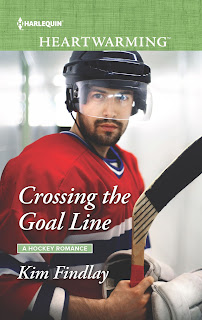 This is very special for me, because it's my first ever published book. I think I once had a short essay published in my high school year book, but that's it. In case you were wondering, this is a lot different.

To give you a little background on this book, it was an entry in the Heartwarming Blitz that was run as part of the So You Think You Can Write page. I thought I could, so I entered. My first manuscript did not pass the goal line, but having thought more about conflict (thanks Mel Curtis!) I was able to give Mike and Bridget a real problem rather than a misunderstanding to work through.

And what is it you ask? (I'm going to pretend you did at least.)

It's a sports romance. Why that?

Think back to the Olympics, which we enjoyed last month. We watch the competitions, feel proud of the medals won by people who share our country of residence, and listen to the stories of the athletes: the sacrifices these participants have been through to get to this place. Some are competing for a loved one, here or passed on, some for a community which has supported them, some for a country that has welcomed them in. But for all of them it's involved a lot of hard work and dedication.

Those stories always get to me. So I wrote a story about two athletes.

Bridget is a swimmer. She never made it to the top ranks as a competitor, but now she's just as focused on getting there as a coach. She's a tomboy, with red hair and freckles, though she doesn't think she has a temper. (spoiler alert: she does!) She's a little impulsive, and speaks before thinking sometimes. I think Demi Lovato's song Confident would be her theme song. Bridget has all the confidence in the world while she's in the pool, but that doesn't translate into her romantic life. 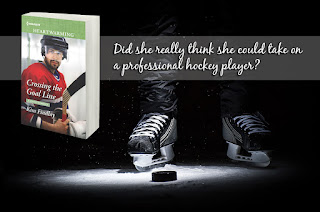 As you can tell from the book cover, Mike is a professional hockey player. He's quiet, confident, and careful. He's been traded to Toronto, and after not playing well last season, is focused on getting back to his usual top form. He's learned that the necessary single minded attention to his play doesn't work well with relationships. But when he meets Bridget, it's a little different. She understands competing, and can even help.

Sounds good, right? But, when you play or coach at that top level, there are limited openings available for you. What happens if your career paths head in different directions? Can a competitor like that give up the dream of a lifetime so someone else can reach their goal? What does that cost? 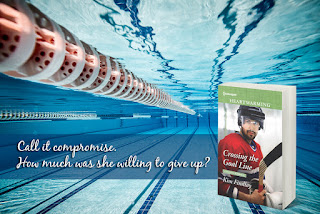 That's the serious part. But I love humor. I find it can get you through the tough times. Bridget, with her temper and impulsiveness, gave me lots of opportunity to weave humor into this story.

This is one of my favorite scenes, because of that. It takes place while they're still getting to know each other. Mike has been injured, and Bridget took him to a game to watch his team play without him. Bridget was disappointed that she didn't get to take him in his sports car.

Bridget thought she was doing quite well with the Land Rover, but there was so much congestion with postgame traffic that they weren’t going anywhere fast. Mike was quiet, still dwelling on the game, she expected.
She decided to distract him. “So, if you’d still had the McLaren on the road, would you have let me drive?”
It took a moment for the words to work their way into Mike’s head. He looked at her and said, “No.”
“Hey, I’m a good driver. And I would kill to drive her.”
“I’m the one you’d kill. You’re much too aggressive. And anyway, I can’t get into my McLaren with crutches.”
Bridget glared at him. “I am not too aggressive. My car likes to be driven that way. And you can’t say I’m driving aggressively now.”
“You’re not driving aggressively now because we’re stuck in gridlock.” There were thousands of people all leaving the arena at the same time.
“What if I promise to drive like someone’s grandmother. Just once...” Bridget wheedled.
Mike looked at her with amusement. “The day you score a goal on me is the day I let you drive her.”
Bridget privately thought that day could be a long time away. But she wouldn’t admit it.
“I think you have a problem with women drivers,” she reiterated.
“I have a problem with anyone driving my car. I’m not letting you, and I’m not letting your brothers. My car, I drive.”
“Until I score on you.”
“Yeah, till then. Good luck.”
Bridget chewed on her bottom lip. This was a challenge, and she’d always responded to challenges. She wanted to do it; wanted it badly. Driving the car would be nice, but making Mike eat his words would be nicer. She looked over at him and found he was looking at her with misgiving.
“I just made a big mistake,” Mike said.
Bridget quickly switched to concern. Had the outing been too much? “You shouldn’t have come tonight. I could tell it was tough for you to watch. Mind you, unless you were a Nashville fan, it was tough to watch for anyone.”
“Nice try, Bridget, but I’m not worried about the game—at least, I’m over it now. The mistake was daring you.”
Bridget laughed. “Too late.”
“I don’t know,” he said, musingly.
“You can’t back out on the deal now!” Bridget protested, pulling through the intersection on a very late yellow light.
“I can if you’re going to run a red!” he yelled.
“That wasn’t red. And I think I need to get you home, since you’re an invalid and it’s making you cranky.”
“If you get in an accident, the deal is off. I can’t risk that with my car.”
“Of course not. I’d never hurt anything as beautiful as that!”
Mike had seen her falling for his car, so he knew she would intend to take great care. But he also knew what it felt like when you got behind the wheel of a vehicle with that kind of power and responsiveness. He’d taken a few risks himself. He looked at Bridget and was sure he saw gears turning in her brain.
“You can’t sneak into the suite in the middle of the night, put a net behind the bed and shoot a puck at it. You have to score fairly.”
“Of course,” she answered, seeming offended. “But maybe we should clarify what you think is fair. You have to be awake, apparently. What if you’re drunk?” 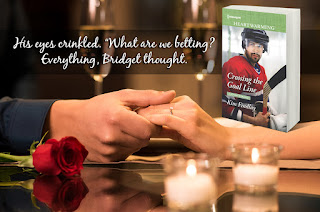 What about you? Sports a non-starter? Do you get interested in offbeat sports whenever the Olympics roll around? Or do you follow a team to the death, living and dying with every game?


Kim Findlay lives in Toronto, Canada, with her husband, two sons, and the world's cutest dog.  When she can get time away from her accounting business, she can be found sailing, reading, or writing, depending on the season, time of day, and her energy level.  You can find her at kimfindlay.ca, @missheyer74, or on facebook.