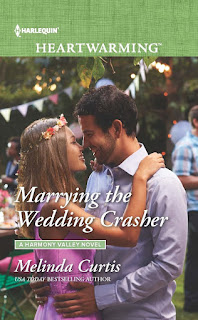 On Saturdays, the Heartwarming authors take readers behind the scenes with books. This Saturday we've got Melinda Curtis on the hot seat, talking about her latest release, Marrying the Wedding Crasher.

Interesting Title...
Oh, gosh. This is a sequel to a previous Harmony Valley book - Marrying the Single Dad. But the title...There's a story in itself.

Originally, the idea for this book was to be about a woman crashing the wedding of Christine and Slade (book3). It's working title was The Wedding Crasher. But my editor didn't warm to my initial chapters, and told me to set the book aside and write other Harmony Valley stories first. When it came time to write this book, I decided to write it using the marriage of Joe in Marrying the Single Dad. I didn't think about the working title at all. As many authors know, the working title isn't commonly used. What I didn't remember was that it was still attached to my documents within Harlequin.

When it came time to fill out my cover art worksheet with title suggestions, I still hadn't handed in the book. I don't think any of my suggested titles had anything to do with crashing a wedding. By that time, wedding crashing was not so much as a glimmer in my plot.

A few weeks before my book was due, I got the word about the final title: Marrying the Wedding Crasher. Uh-oh. My editor politely asked me if that was ok, and of course I said yes, because that's what you're supposed to do. But it was a mad scramble to set up the wedding crash!

Tell us about your hero...
I've been with the line since it began, and during that time, it feels - to me, at least - that we went from being allowed to write some sensual tension in the books while still not having a bedroom to really strict rules about not writing much chemistry at all and back again. If you say I can make a hero sexier, I'm gonna do it.

But Vince isn't just sexy with Disney Prince hair (think Eric in Little Mermaid). He's got heart and a wounded soul. And as he falls for a woman seven years younger than he is, Vince is fighting it all the way. He's one hero I just hated to let go of.

Warm hands engulfed hers, not the slightest bit vengeful. “Harley?” A gentle voice, one she should be able to identify if her head didn’t feel like someone had stuffed it with thick insulation. “You’re safe. He’s gone.”
Harley opened her eyes on a shuddering breath. A familiar face greeted her.
Vince. They both worked for Jerry, remodeling houses.
Vince. Friendly black eyes, a sturdy nose and black hair. That black hair. It had required a second glance when they’d first met. He had fantastic hair. The kind of hair Disney gave its princes.
Her heart was racing for the exit and her hands had started to tremble in his. Vince’s hands, not  Dan’s.
Vince. He drove an old truck, not a new Ferrari. He’d offered her carrots once when he’d heard she’d forgotten her lunch on a remote job site. He’d bought her a drink after work one day, which had led to him buying her dinner—more than once—and then the infamous weekend away where he’d learned she’d quit being an architect. Not that he’d understood Harley and her inability to pick herself up after one undisclosed setback. He may have been seven years older than her, but that didn’t mean he could be judgmental about her career choices.
Note to self... I’m not safe with Vince, either.
“Hey.” Vince gave her hands a gentle squeeze. “Are you with me?”
With him? She would’ve followed him anywhere a few weeks ago, before the let-me-tell-you-what-to-do-with-your-life debacle.
Vince moved to sit next to Harley, tucking her beneath his arm, next to his bulky tool belt. “Breathe in. Breathe out.”
Sounded easy enough, but that heart of hers was hammering against her lungs, making her pant. Vince holding her wasn’t helping her recovery. Not that she moved away from him. Not one inch.
“Like this.” Vince took Harley’s hand and placed her palm on his sturdy chest.
She could feel his heart beat nearly as fast as hers, but she could also feel him fill his lungs with air.
“Breathe in. Breathe out.” Vince was big and warm and calm, and completely different than Dan. He’d never be a slave to fashion. He’d never take credit for someone else’s work. He’d never put his hands on a woman with intent to do damage.
In a distant part of her brain, somewhere where things weren’t pounding, Harley’s mother recited one of her Southern lectures. Life is hard, baby girl. You need to find yourself a big, strong man to lean on when times get tough.
Finding big, strong men was something of a specialty of Harley’s. It was finding the ones she could lean on forever that eluded her.

What can you tell us about the Harmony Valley series?
Several years ago, Harmony Valley was on the brink of extinction. The only residents in this remote Sonoma County town were over the age of 65. Now that people under the age of 40 are returning to town and opening business, the elderly contingent isn't opposed to speaking their minds. I enjoy writing those older characters because I enjoy interacting with my parents and their friends - who have no qualms telling me how things used to be, what's wrong with the world today, and how I should be living my life! Along with a treasured family recipe or two, like Ham, Bananas & Hollandaise casserole. Each book stands alone, btw, so you don't necessarily have to read them in order.

Thanks for stopping by today. We hear you have a busy schedule what with your first grandchild and planning your daughter's wedding!
Yes, fun times. But I'll talk more about that on Monday! Happy reading!

Melinda Curtis is an award-winning, USA Today bestseller. She writes sweet romance for Harlequin Heartwarming, sweet romantic comedy, and sexy sports romances. As of February 15, 2018, she became a grandma, thanks to her oldest son. A few weeks before that her daughter became engaged. So much for that empty nest, I can write as much as I need to mentality!