All Creatures Great and Small by Janice Carter

Posted by Janice Carter on April 24, 2018
Recently a Facebook video of a raccoon adroitly breaking into a 'raccoon-proof ' green compost bin here in Toronto, Ontario went viral. The city and all of its news media were entranced by the sight of a raccoon using its front paws to unlock the lid of one of the city's new scavenger-immune bins in mere seconds. You can see the video here.

All kinds of animal experts were interviewed as our citizens considered their shiny new bins with more cynical eyes. More news items appeared over the next several days extolling the cleverness - and even intelligence!- of animals.  One such article referred to a famous crow, appropriately named "Canuck", that had been terrorizing a neighborhood until an intrepid letter carrier befriended it with tokens of nuts. There was a 'mug shot' of Canuck holding a knife it had pilfered from a crime scene. 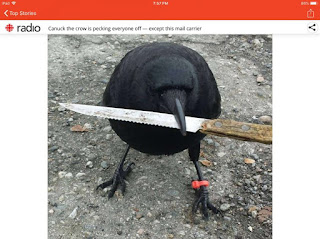 This last story reminded me of the summer of Bob the Grackle. I was sitting on the deck of our cottage when my reading was interrupted by a loud squawking on the grass around the deck. An adult female grackle (a type of starling) was being hounded by its offspring, flapping angrily as its mother pecked for insects. The fledged 'baby' was clearly being weaned and its mother wanted nothing more to do with its feeding. I went into the cottage and found some peanuts which I threw into the grass. Needless to say, mother and son (?) were hooked, returning every day to the deck.

One day Mom Grackle had disappeared (gone to seek a life of her own) but her offspring still came daily. Each morning I was greeted by Bob (named for his comical bobbing walk), waiting patiently on the rail of our deck until I deposited a handful of chopped nuts. As soon as I was safely away, he'd bob along the rail to his brekkie. After a few days he was eating out of a small bowl, hopping onto the rim and digging in. My report of this event elicited an email from my daughter. "What? Bob has his own bowl now?" she'd asked, almost petulantly.

I knew Bob was smart but I didn't realize how smart he was until the afternoon I was reading with my back to the railing where Bob always landed to eat. There was a metal table behind and between me and the railing. Suddenly I heard a tapping noise. I craned round to see Bob standing on the table, trying to get my attention, an expression of "Well?" on his face.  I turned away, fearing to move and scare him off.  Then seconds later he was perched on the back of the chair next to mine, inches away. We eyed each other peripherally (and nervously) until I got up, sending him flying off. I went inside, came out with his bowl, placed it on the railing and waited. He was back in an instant.

This routine continued all summer until mid-October when Bob kept reappearing throughout the day for treats. I was puzzled at first, until the next day he'd gone, migrating south after a day of gorging.

Humans have always known that domesticated animals like cats and dogs have personalities, but that summer expanded my awareness of and sensitivity to the 'intelligence' of other animals, too. Now when I read articles about new theories of animal behavior - that many species demonstrate intelligence, empathy, grief, love, playfulness, self-awareness and, the most recent, that some (even some mollusks!) show consciousness - I think of Bob.

There's a new book out titled "The Inner Life of Animals" by Peter Wohlleben and Jeffery Masson that I'm thinking of requesting for Mother's Day. Spring is finally here and summer's approaching.  Soon I'll be at the cottage again, experiencing Nature first hand, and maybe this year another Bob will come into my life.

What stories do you have about animal behavior? There must be millions! 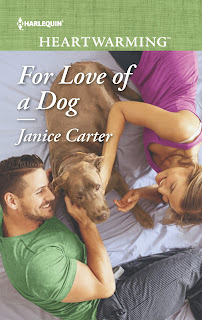