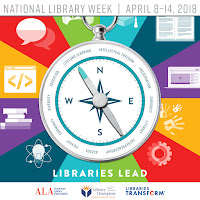 As a child, it was a rite of passage at my house when my sisters and I became--in my Mother's opinion--old enough to get a library card. This magical age was six. Having achieved six years on this planet, we were entrusted with our own card, and my mother made an important occasion out of walking with us to the library to get the sacred piece of cardboard which would someday be filled with titles and stamps. My sisters and I memorized our library card numbers as if the card were an important part of who we were. And this could not have been more true. As a child, I spent hours walking to the nearby library, selecting books, and hauling home my treasure. I knew all the librarians and I thought they were rulers, filled with power in my small home town.

I was lucky my mother believed in the power of reading, and my father was equally important.

My Father was on the board of the local library. He would attend meetings at least once a month, going out after dinner and returning home late filled with stories about what was happening at the library. My father's devotion as a board member was intense. At one point in his service, he raised (almost single-handedly) $450,000 to build an addition to the library. He personally wrote letters and called benefactors for donations, and he even got very creative. Although he never rode a motorcycle in his life, my Father raffled off a Harley-Davidson, selling tickets for a year at every fair and festival, to raise money. He retrofitted a trailer to haul the motorcycle around and displayed it wherever people were gathered who might buy a $20 raffle ticket. The addition to the library is beautiful, and I know in my heart he deserves the credit. (And my mother, who went along on all those trips and helped patiently--they should have named the addition after her!) Dad just celebrated his 73rd birthday, and he still serves the library however he can.

I loved my hometown library because of my parents' example, but I also fell in love with a majestic library as an adult. 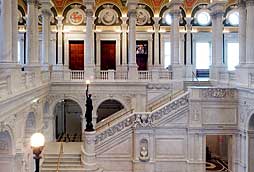 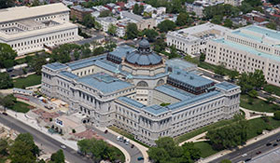 The most incredible library I've ever seen is the Library of Congress in Washington, DC. Designed by Thomas Jefferson, the LOC is right behind the Capitol, and it is visually stunning inside and out. The mosaic inside depicting the goddess Athena is amazing, and all the inlaid depictions of the greatest writers in history is an inspiration. White marble staircases, soaring ceilings...swoon. You may have seen the many movies--including National Treasure--that show the "reading room." I've actually been in that room! On a trip to Washington, DC, a few years ago, I discovered that a regular person like me can get a library card to the Library of Congress. That's right, you guessed it. I have a library card to the Library of Congress. I can go in that beautiful room, select a book off the shelf, and read.

No matter how stunning the nation's library is and how rich with history, at its heart, I know it's just like the little library down the street from the house where I grew up. Someone had to believe reading was essential, someone had to raise the money to build it, and everyone has a responsibility to make certain that the treasure of words remains accessible to everyone who takes the bold step of signing up for a card.