Sit down Saturday...with Her Family's Defender

Posted by Kim Findlay on May 05, 2018
Kim Findlay here, again! It must seem like I'm hogging this blog: I was here at the end of March telling you about my first book, Crossing the Goal Line, and on Monday I was bemoaning Canadian spring. I promise, this is it for a while.

Before I tell you about Her Family's Defender, I wanted to mention Thursday night. Harlequin had an open house for their new Toronto offices, and I was invited. It was great to meet some fellow Heartwarming authors (waves to Kate and Janice).  It was also great to get this name tag: 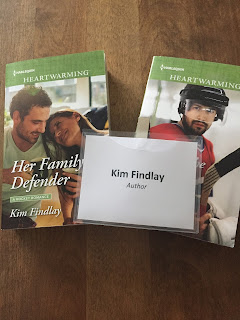 It's the first time I've been tagged as an author!

And since I have a May release, I assume, I found several copies of my book at the offices. It made me feel like I belong, at least a bit. 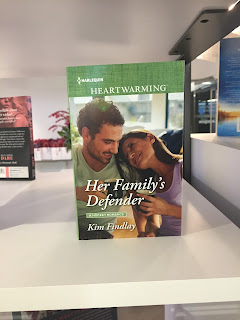 And now, more about this book.

Her Family's Defender is coming out now, right after my first one, thanks to Mel Curtis, who told me when I was offered a contract to send my next story along and maybe get a two book deal...and it worked.

My hero, Troy, was a character in Crossing the Goal Line, but he was not hero material, though he did have a saving trace of humor. Since we're supposed to be tough on our characters, I tried to imagine what could happen to him to change him. I imagined he had to face something he wasn't tough enough to overcome on his own - and thought of cancer. When this book opens, he's missed a year of playing as a result of undergoing cancer treatments, and I explored how I imagined that would change his outlook and behavior.

He would need a heroine who was just as tough. Michelle is a widowed army vet, with two kids. Michelle has come to Toronto for a fresh start, since she has her own issues. After a rocky initial meeting, Troy wants to help her hockey crazy daughter, but Michelle won't accept financial assistance, which is the easy thing for Troy. But Troy didn't make it to the NHL by giving up easily.

Troy changes from player to family man over the course of the book. I enjoyed taking that journey with him, even as Michelle made it very difficult.

He sat down in his favorite chair. He looked around his place.

It was a single guy’s pad, no doubt. That was what he was. He’d never had a relationship longer than a few months. He remembered the comments old girlfriends had made—that he was a kid himself. He frowned. Would Michelle believe he was in this for the long haul? Could he convince her? Convince her he was ready to commit to her and the kids, and anything else that came up?

He’d just have to show her. Show her that he was reliable, that she could count on him, that he was around for the long haul. He tried to convince himself that kissing her senseless might help with that, but he realized that kissing her at every opportunity might only reinforce his player image.

Okay, he was ready to start Operation Michelle. He’d show her he could be just as responsible as she was. That family wasn’t going to know what had hit them.

And when he had that accomplished, operation Kiss Michelle Senseless was going to be next.

The hockey playoffs are on, and my team is out already. It was satisfying to write a couple of books where I could ensure that the hockey gods were behaving the way they should.

Happy May, everyone. Canada is finally experiencing some spring-like weather, so I hope everyone has a wonderful weekend! 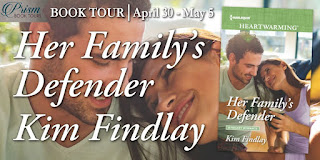