Posted by Patty on June 25, 2018
With all the excitement about the royal wedding last month, it got us to thinking!

It might seem like an easy answer, because who wouldn't want to live like a princess in a literal castle and have that amazing clothing allowance?

But what about YOU? Would you say yes and marry a prince? We answered! I know, I know, that's so disappointing, isn't it? But I couldn't help but see all the things that Meghan had to give up in order to marry Harry. Her career, for one. She worked really hard to grow her acting career and get onto a hit TV show. That wouldn't have come easily! And now, she won't be able to ever act again. That's a big sacrifice for a creative person. I think she looks completely in love, and it's beautiful, but what about the years down the line? Will she be fulfilled without acting? I don't know. Maybe it wasn't as important to her as I'm assuming.

For me, if I married a prince, I wouldn't be able to write romance novels anymore. Or any kind of novel, really. It wouldn't be allowed, and that would choke me. I can't give up my writing. If I don't write, I get all wiggy. I need that specific creative outlet, and I get a huge amount of personal satisfaction from being published and sharing my stories with all of you.

Even for love... that's one thing I just can't give up! 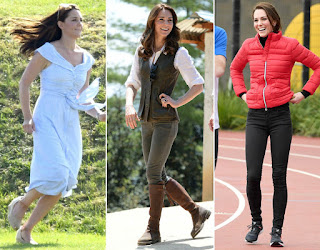 One other thing--those princesses stay stick thin. It seems to be a requirement, because I haven't seen a full figured princess yet! Even after three babies (and the third one very recently born!), Kate is like a willow. That's another thing I wouldn't be willing to do--keep myself rail thin for image. I love food. If I had to deny myself for a lifetime just for the "perfect picture," I'd be incredibly crabby.

On a constant diet and unable to write books? I'm better off as a commoner!

So I'd regrettably have to turn the handsome prince down.

I sort of agree with Patricia Johns…Meghan is giving up a lot to become Prince Harry’s wife. I’m not sure I’d like being under the microscope that she will be under. But if I loved my prince, it might be worth it.


Can you imagine the exciting life she will live? She will travel the world, meet dignitaries, kings and presidents and even ordinary people, and oh, the balls she will attend. And don’t forget, she will never ever worry about money…


I imagine it will be hard to give up acting, but both she and Harry seem to march to a different drummer. They aren’t quite as traditional as, say Prince William. I wonder what would happen if she did decide to resume her acting career? She’s a strong woman and she might be the first working princess! Wouldn’t that be something?


But to answer the question…if I were really in love with my prince, I probably would accept his proposal. And find a way to keep writing my books…maybe under a nom de plume.


Now, what would your answer be? Would you say yes and marry a prince?