Sit Down Saturday: Saving the Single Dad by Cheryl Harper 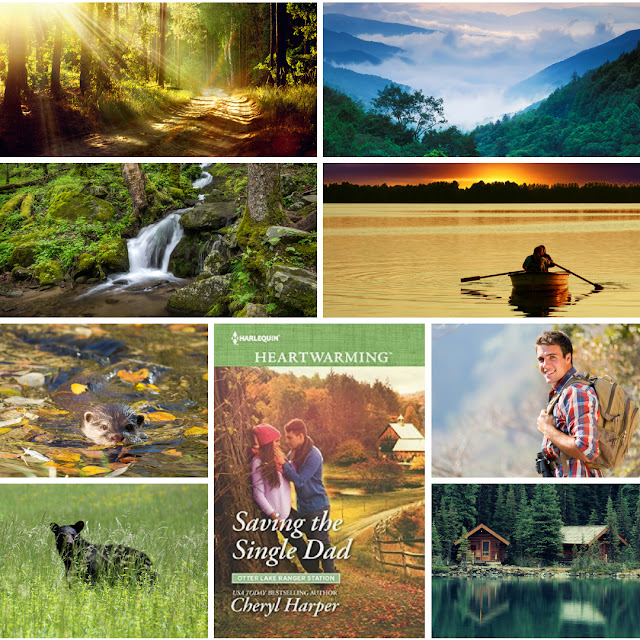 "Where do you get your ideas?" That's one of those questions readers ask. It's also a question I ask myself, particularly when they *aren't* showing up. Some books start with a spark. Saving the Single Dad is one of those books for me.

It all started while I was eavesdropping on a conversation a big tough guy was having with his son on the phone. The sweet "I love you" before he hung up instantly gave me hero inspiration. Brett Hendrix is a law enforcement ranger with his hands full raising his kids alone. Christina Braswell, waitress at the campground diner and his ex-wife's best friend, is the only help in sight. When we meet Brett, he's having a bad day, but he always has time for his son's phone calls.

I've got a giveaway going at CherylHarperBooks.com. Enter to win!

“Dad, Riley said she’ll give me ten dollars if I do her chores when we get home this afternoon. That’s a good deal, right?” Parker said, and gasped as if he was running down the hall. They’d been on time when he dropped them off, but Parker’s curiosity led him astray. A lot.
First grade was all about exciting new things.
“We’ve talked about this. Riley doesn’t have your best interests at heart, son. Remember that and try to think about her offers with that in mind.” Brett glanced over his shoulder to see that Christina had managed to shake loose of her meditation to bag up his order. She’d put two cups right next to the bag. He should have kept an eye on her. A wise man never turned his back on an angry woman.
Interrupting whatever little showdown she’d been caught in the middle of might be the first thing that had worked for him that morning. He hoped it wasn’t the last. She’d never thank him. She never had been the grateful sort, not even when he’d done his best to make sure she was safe. For a split second, he’d wanted to try that all over again, but the woman had more sharp edges than shattered glass.
“But it’s folding clothes, Dad. And she said she’d help me with my room.” Parker sneezed and Brett could almost hear the nurse’s phone call telling him his son needed to come home. Right now, no fever meant no sick day.
“What happened the last time she made that offer?” he asked as he pulled his wallet out. With one raised eyebrow, he asked Christina his total. She took a ten from him and turned to the cash register.
“She tricked me.” Parker’s sad voice made Brett smile. Having a daughter with an impressive criminal mind was scary. He’d only managed to stop her from shaving off her hair because Parker had asked him where his clippers were that morning. He’d had to learn to follow the trail to anticipate however Riley would act up next, and it often started with his trusting son.
Since her mother had gone off the deep end again, Riley needed careful attention. How to help her eluded him, but keeping her safe wouldn’t.
“Right. Don’t let her trick you again. This morning she almost got you, so watch her, P.” Brett took his change and shoved it in his pocket. “Now, be good. Pay attention. Call me when you get home this afternoon.”
“I will, Dad.” Parker heaved a huge sigh. “Girls are tricky.”
“Don’t you ever forget it, son.” With his wife’s best friend watching his every move, he couldn’t argue with that. “I love you, Parker.”
“Love you—” The call ended before he finished the rest of the sentence. That was Parker’s usual goodbye, so it was more reassuring than worrying. 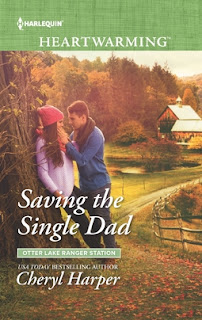 Saving the Single Dad
His son and daughter—
They are her family, too
Christina Braswell would do anything for her divorced best friend’s kids, including help their father. Park ranger and sudden single dad Brett Hendrix inspires trust and has everyone’s back. But Christina’s torn between loyalty and a deepening attachment to the handsome Sweetwater, Tennessee, lawman. Brett’s not making it any easier—Christina’s finally feeling as if she belongs somewhere.
Harlequin: https://www.harlequin.com/shop/books/9781488085109_saving-the-single-dad.html
Amazon: http://amzn.to/2DgIWO1
Barnes and Noble: http://bit.ly/2oYQa4S
iTunes: https://apple.co/2p7GLXI
Kobo: http://bit.ly/2GfMzXi
Goodreads: http://bit.ly/2p53jbU