Prince Harry on a Horse

Look at what the art department at Harlequin gave to me--Prince Harry on a horse! Does it get any better than this? 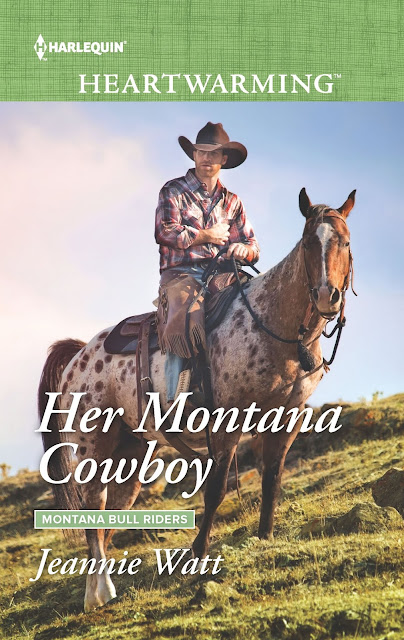 This is an amazing cover for my first Heartwarming, which comes out in August. I am thrilled. And besides Harry being perfect, the horse and the gear are perfect. Yay, Harlequin Art Department!

Her Montana Cowboy is the story of a woman, Lillie Jean Hardaway, who discovers that her beloved grandfather had a secret life after she inherits half interest in a ranch she didn't know existed. The hero, ranch manager Gus Hawkins, had no idea that his great uncle wasn't the sole owner of the ranch until Lillie Jean shows up to inspect and sell her half. Lillie Jean intends to sell and head back her clothing business in Texas, so Gus has his work cut out for him trying to convince her to keep the property intact.

This is a city-girl country-guy story and it was a lot of fun to write. Here's an excerpt from a scene where Gus helps Lillie Jean get her car out of a mud hole in the long driveway leading to the ranch. It opens with them riding in the tractor:

Lillie Jean smelled like lilacs, a scent Gus knew well, due to the thick hedge near the ranch house that burst into blossom each spring, filling the air with perfume and sending old Sal’s allergies into high gear.

He hated that he noticed that Lillie Jean smelled good. Hated the way the delicate floral scent made him feel like leaning closer and taking a deeper breath. In fact, it was really annoying to find himself feeling that way, so he was very glad to finally arrive at the car.

Lillie Jean put her hand on the door handle before he’d rolled to a stop, and he automatically reached past her to keep her from opening the door. She shot him a startled look, which he met with a frown, once again doing his best to ignore the lilacs and the incredible color of her eyes.

“Never open the door until the tractor is out of gear.” He made a show of moving the gear lever. “Big tires,” he said in a clipped voice. “Very unforgiving.”

“Is it okay now?” Lillie Jean asked as she eyed the giant rear wheels.

“Yeah.” He put on the hand brake and set a hand on the back of her seat to maneuver himself out of the cab. Lillie Jean took the hint and climbed down the stairs and jumped to the ground, quickly moving out of range of those big tires. Gus followed her and then reached up to drag the chain off the floorboards under the seat.

The mud was deep and water soaked into his jeans as he crouched down to attach the chain to the frame of the big car. Once done, he motioned for Lillie Jean to get into the driver’s seat.

“You start the engine and steer. Do not step on the gas.”

“Because it’ll annoy me if you ram that big car into the tractor.”

“Oh.” She moistened her lips—a mistake in the cool weather—and then said, “You don’t have much faith in my driving ability.”

All he did was point a finger at the car in the mud then turn and walk back to the tractor. “Just put it in neutral,” he said, “and let me do the rest.”

“Why even start it?”

“So that the steering wheel works.

From the way her jaw muscles tightened, Gus deduced that she was starting to hate him a little.
“I knew that.” She abruptly turned and headed toward the car, mincing her way across the lumpy half-frozen mud next to the door.

Gus climbed into the cab and, once Lillie Jean was situated behind the wheel, he gently eased the tractor back until the chain was taut. He continued inching backward until the car jerked, then moved forward. Lillie Jean kept the wheels straight until finally the car was free, and he swore he could see her biting her full bottom lip as she concentrated, even though they were separated by twenty feet and two windshields. Once he was certain Lillie Jean wasn’t going to throw the car in gear or anything unexpected, he moved the tractor forward so that the chain sagged.

“There are no more puddles between here and the ranch house, so you should be okay,” he said as he unhooked the chain. “You should be equally okay when you leave, which will be in short order, right?”

Lillie Jean propped a hand on her hip and stuck her chin out. “Enough, okay?”

He stowed the chain back in the cab of the tractor and then turned to her. “Enough what?”

“Enough passive-aggressive stuff. And enough insinuating that I’m not who I say I am, and that I’m here to try to take advantage of your uncle. I’m not.”

“I have no way of knowing that.”

“And you have nothing to do with this situation. It’s between me and Thaddeus.”

“Thaddeus is getting up there in years. I’m his nephew, his ranch manager.”

He gave her a small, not particularly friendly smile. “Meaning that, until Thad tells me otherwise, it’ll be you and Thaddeus and me.”

I hope you enjoyed the excerpt and the cover. Her Montana Cowboy is available for pre-order right now and will be officially released on August 1st.