The World of Beatrix Potter by Janice Carter

Posted by Janice Carter on September 25, 2018
"Once upon a time there were four little rabbits and their names were -
Flopsy, Mopsy, Cotton-Tail, and Peter."
from The Tale of Peter Rabbit by Beatrix Potter 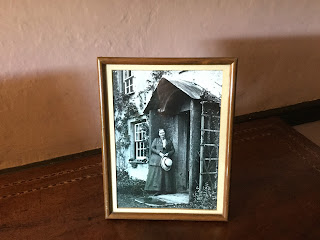 Many, perhaps most, of us know those opening lines from that iconic children's book, The Tale of Peter Rabbit, and have read it to our children or grandchildren (as I plan to do some day!), but how much do you actually know about the life of its prolific author-illustrator?
Speaking for myself, not much, as I learned on a recent rip to the Lake District in England and a visit to her final home in Hawkshead, near Lake Windermere.


Helen Beatrix Potter was born in London England in 1866 to a wealthy family of cotton merchants, artists and photographers. Like many girls of the upper-middle class in the late Victorian era, Beatrix was educated by governesses and expected to lead a life devoted to the arts, as well as family. But Beatrix was no ordinary Victorian woman.
The trajectory of her life veered off that proscribed course when she was twenty-seven. She'd written a letter to the sick child of her former governess - an illustrated story of a family of rabbits. The story became so popular among friends and friends of friends (through the social media of the day - word of mouth) that she decided to send it to a publisher. Her subsequent rejection didn't deter her, however. She had it privately published and its success soon led to a commercial publication in 1902. It was then that Beatrix showed her flair for business, as she negotiated terms with her publisher that included the size (small enough to be held in a child's hands) and sale price. Three years later, Beatrix bought her own home - Hill Top - with the royalties from The Tale of Peter Rabbit and went on to write 22 more books over the next 20 years.

But her story didn't end there, as my imagining of her life had. Hill Top, on the edge of the village of Hawkshead, was a place where Beatrix found consolation from the recent death of her fiance and the inspiration for her series of books. But the countryside was also where she could expand her interest in science (illustrating and writing about the local flora, especially fungi,for scientific journals) and in conservation, as she began to purchase large tracts of land for farming as well as forest preservation. A long swath of shoreline along Lake Windermere was planted with every variety of tree native to England, altering its once sparse area to a verdant landscape.
Her interest in farming led to the raising and breeding of sheep, an endeavor for which she also became famous locally, and that led to the acquisition of 13 farms and over 8000 acres of land. By this time, Potter's skills in business were as widely-known as her talents as an author-illustrator.
When The Tale of Peter Rabbit became such a success, Beatrix had the foresight to license the book and its characters, taking control of it and all of her future books and characters. She created and developed her own brand, an innovation unique for the times, and was thus guaranteed a lifetime revenue on all merchandising for heirs that continues today.

By the time Beatrix was in her forties, she was already a famous writer, a respected naturalist and botanist, a well-known breeder of sheep indigenous to the area and a conservationist.  But what about her personal, romantic life?
Eight years after the death of her fiance/editor, 47 year old Beatrix married her long-time friend and lawyer, 42 year old William Heelis. Ever the shrewd businesswoman, she no doubt continued to consider the pragmatic interests of her personal life, over the romantic ones. In a letter to a friend after her marriage, she wrote that her husband was "satisfactory in every way."
I pondered that phrase, which I read from a biographical excerpt on display at Hill Top, for some time. It reveals much about a woman as extraordinary as Beatrix Potter - suggestive of a practical, realistic nature ("satisfactory"), but also of a woman with an earthier side, in the slyly written last three words: "in every way".
Helen Beatrix Potter died in 1943, bequeathing more than 4000 acres of her land to the National Trust, and the net worth value (in today's dollars) of her estate was equal to 20 million dollars. She was definitely a woman who strove and succeeded way beyond the expectations of the times - a woman for all time.

*Do you have a favorite Beatrix Potter story?

Celebrating the first anniversary of my first Harlequin Heartwarming,

I will be happy to send a copy of For Love of a Dog
to the first four people who comment here and email me
your address:  janicecarterbooks@gmail.com