Not what you were expecting as a topic, I bet. How often do we talk about anchors? Actual anchors, that is.

Nowadays, we use anchors as a metaphor. 'He was my anchor.' 'Such and such will anchor the program.' We sing hymns about anchors holding in a storm. We all understand what we mean by that, in a theoretical sense.

A little more than a month into our adventure, I've come to have a much greater appreciation for the value of an anchor, in a practical, tactile, 'this is going to save us' sense.

We've had to anchor a few times on this trip. The first time was our first night out, when we had crossed Lake Ontario from Toronto to Sodus Bay, New York. We anchored at 3 AM. (Just in case you were wondering, anchoring will test a marriage as much or more than wallpapering.) Fortunately, it was a calm, though dark, morning, without any real excitement.

We went down the Oswego Canal, then the Erie Canal. There's not a lot of opportunity to anchor in a canal, and it wasn't till we were out of the canal system, on our way down the Hudson River to New York that we had another chance to anchor. Again, it was a pretty easy thing. There's always that moment when you put the boat in reverse, throttle hard, and hope that it holds, but we were fine.

Then we hit Sandy Hook, New Jersey, on a windy, boisterous late afternoon, and got our first experience at anchoring with tides and currents as well as wind.


I won't go into too much detail about the stress of yelling over wind and motor with the current pushing the boat backwards into the wind. My husband was wrestling with the 45 pound Rochna anchor and 100 feet of chain while suffering from sciatica, so you can probably imagine some of what we went through.


It wasn't an easy night. The boat was buffeted all night long, and we didn't sleep well. There were new noises, and we had to decide if they were an annoyance, or a real problem. The next morning, we found we'd moved a bit. The anchor wasn't caught firmly, and had dragged.

We re-anchored, with some trouble. We went back down, napped, lunched....and woke up that afternoon to find our boat had dragged back 400 feet.

We anchored again. Took a few tries to make sure the boat was set. Had the anchor alarm on, and checked every ten minutes for the rest of the day to make sure we were still in the same position compared to the other boats and the shore. It was tricky, because the boats were moving on tide and current and wind, and there was no set line. We'd look, think we'd moved a bit, try to talk ourselves out of it, and then we'd see that we were in good position, and cross our fingers. 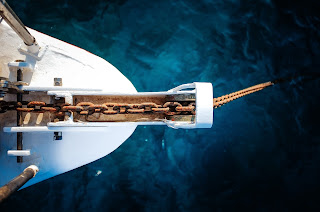 The wind came up, and the tide, and it was nighttime. We had to trust our anchor.

We didn't sleep much again. It was now too rough to consider trying to re-anchor, so we had to hope our anchor was holding. If not, we'd be somewhere in the middle of the bay, vulnerable to ships, shoals, and any other hazards out there. The wind could send us almost anywhere, unless the anchor held. We couldn't motor to another position with the anchor weighing us down.

There was a lot of praying, a lot of double checking, an obsessive monitoring of the anchor alarm. But we survived. And I understood in a very literal sense how much an anchor could mean to survival.

An anchor can literally save your life. It can keep you safe when there's a storm raging.

I'm sure I'm going to experience more nautical based expressions as we continue on this adventure. I would be relieved if those experiences were a little less nerve-wracking than this one.

I hope everyone is safe as we've seen this past week the power that nature in the form of wind and water can exert. We need to keep that in mind, since we often become complacent about our position in this world.

Let's be anchors for each other, too. Not literally, but we all need security, a safe place.