It's the Little Things by Pamela Tracy 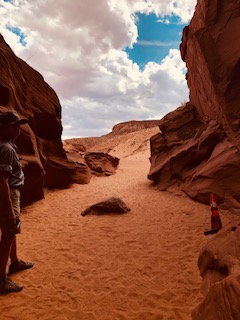 Just over a week ago, I stood before this exit.  Yes, this is the exit.  A group of us had Jeeped onto the Najaho reservation to explore Upper Antelope Canyon.  I'd see pictures, but the truth is... pictures (like the one above) don't portray the true beauty because only one scense is utilized: sight.

In writing, the experts (meaning authors higher up the food change than me) tell us to utilize senses in every scene.  And, they're right.

In Antelope Canyon, there was sound (think 200 tourists, some speaking different languages) and smell (dust) and touch.  This was one canyon where we were allowed to touch the walls because it was made by thousands of years of flash floods and it was still being made and a flash flood had happened just a few weeks earlier.

Taste might be the hardest sense to portray.  And, really, in writing taste and smell go hand in hand.

The scene I'm working on now, well, I need to ratchet up the senses.  Sight is there; it's always there.  But, how can I made the rest impactful for the reader.

I have my hero: Michael Fitzsimmons.  I really need to work on the tone of his voice.  Think about the last line of Gone with the Wind.  Clark Gable's voice compared to Dick Van Dykes.  No comparison.  I need to make Michael's voice a no comparison.  Deep, reasonate.  I need to figure out what syntax of language he uses.

Sound, I love sound.  My opening scene is in a barren, woods area.  I've described it (I love sight).  Now I need to add wind and more.

Smell will be there too.  Maybe not so much in the car (my car smells like McDonald's and old socks, thanks to my 13-year-old).  But, yup, I can do a lot with woods smell.

Touch is good.  This is Michael and Amalie's 2nd meeting.  The first happened more than 13 years ago.  Bot were newly teenagers and afraid.  They're still afraid.  Can you touch fear?  Feel it in the air?

Gish.  Do you like the way an author's mind works?  Scary, eh? 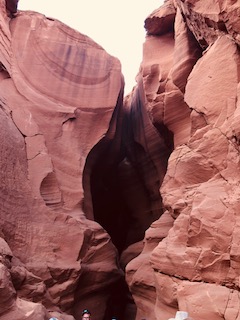 Entering a canyon is a bit like starting a book.  You never know what might be around the curve, whether it's friend, or foe, or crowds, or danger, or.... well, you get the picture.

Sometimes, though, when you finish the scene, you sit back and think to yourself, "Wow, maybe I just created something worth looking at." 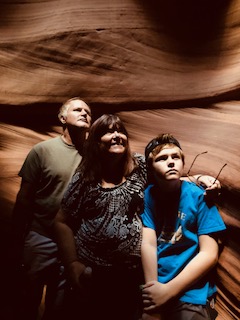 Are you reading or writing something worth looking at?  Do share.

*  Pamela Tracy's next Heartwarming A Soldier's Valentine is an April 2019 release.