Why I'm Thankful for Cancer by Syndi Powell 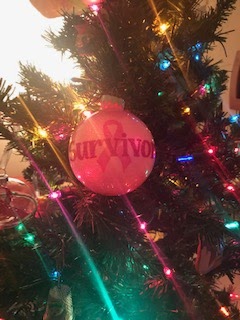 WHY I'M THANKFUL FOR CANCER BY SYNDI POWELL


This time of year when we turn our attentions to people and things we are thankful for, it seems contradictory that I would be sitting here thanking God for my cancer. It doesn't make sense that I would be grateful for a disease that took so much from me. And yet, I I know that there have been many blessings in my life because of it. Today marks the fourth anniversary of the first surgery to determine the course of my treatment, so it seems fitting to share my list of why I'm thankful for cancer:


1. I have a better appreciation for the little things. Whether it's a good cup of coffee (which I couldn't drink during part of my treatment) or being able to lift my arms above my head, cancer slowed my life down so that I could take a moment and be thankful for what I did have. It also made me appreciate the things that make me myself: my creativity, my kindness, my quirky sense of humor, my nerdy obsessions, etc. I learned to love myself, faults and all.

2. I met some wonderful people because of cancer. From the doctors and nurses that have been a part of my treatment to other survivors, cancer brought so many to my life and made it better. It also tore down physical and emotional barriers between me and some people who were already in my life.

3. I don't take my health for granted anymore. I know what it's like to think that the worst won't happen to me. I'm young so that should mean cancer won't touch me. Surprise, surprise. I count pain free days as a blessing and know those that aren't will pass. I've found beauty in my scars because that means I survived what tried to kill me.

4. The important people stayed in my life. Acquaintances became friends while some friends became distant. My relationships with some of my family and friends deepened because we stopped taking our time together for granted. We realized that life was more fragile than we had been treating it, so when we said we would get together soon we set a date.

5. I discovered that I am a strong woman. Sometimes I wish I could go back to the person I was four years ago before the C word was uttered and assure her that everything will be okay. But because I didn't know what would happen, I discovered that I have stores of strength in my mind and body. While I had some bad days, I never gave up. I kept going despite the pain and despair that felt so overwhelming at times. Because that's who I am: I'm a fighter who keeps going.

6. Three books were born out of my experiences with cancer. They say that you should write what you know, so I used my cancer to tell stories about women like me. While their experiences with breast cancer were different than mine, each woman in those three books had pieces of me inside them. Sheri had my strength despite being blindsided by her diagnosis. April had my optimism and bucket list. Page had my anger and despair of ever having a normal life. All three women taught me something about myself as I wrote these books, and for that I'm grateful.

7. My faith was restored. I had walked away from God for several years much like the prodigal son thinking I could have a better life doing things my way, but I discovered that all I had was illusions and disappointments. Cancer brought me running back to my Heavenly Father where I found love and redemption. He poured out so much grace and mercy into my life throughout the process, and I've been brought to my knees in praise and thanksgiving for the One who continues to bless me.

So yes, I'm thankful for cancer. It tried to take so much away from me, but I'm clinging instead to the things that have enriched my life. And this Thanksgiving, I'm thankful for being in my last year of treatment.