This past Saturday my husband and I went to Sears.  We actually shop there somewhat often... obviously not often enough.

We'd heard that a few Sears stores were closing.  But, we didn't realize OUR Sears store was closing.

Change is inevitable.  When I was a young teen, going to the mall was the thing to do.  My girlfriends and I would spend hours going to stores, then converging on the food court, and ending with the theator.

It goes back to my early childhood.

My parents had two favorite stores:  Kmart and Sears.

Kmart was the neighborhood store, but we had to drive a ways to get to Sears.

Sears was smarter back then.  The minute we walked through the front doors, the toy department was to the right.  It was an easy turn.  My dad was all about the tools.  They were very close to the toys, meaning Dad could meandor off.  Mom always wanted to head up the escalator and to the clothes.

Back then, I didn't care about clothes.  Nope, it was all toys.

When I was ten, Christmas time, I wanted a Beautiful Chrissie doll.  Oh, how I wanted it.

We went to Sears, probably for tools but maybe so my parents could get an idea of what else I wanted besides Chrissie since she'd been the only item on my list. 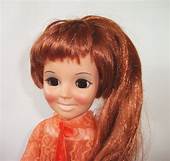 The Chrissie dolls were (all hundred of her) stacked on an aisle display.  I did the ten-year-old whine. "Mom, isn't she beautiful.  Oh, can't I have her?  I want her so badly.  She'll..."  Well, you get the idea.  My parents tried to be patient.  They reasoned, "We don't have the money right now."  Eventually, I was seriously reprimanded and silenced.

Of course, I didn't know that a Chrissie doll was at home, wrapped, and hidden.

I'm an excellent whiner (unfortunately, my 13-year-old inherited this ability).  Once I'd been silenced, an older woman approached my mother and offered to buy the doll for me.

I got in a lot of trouble when I got home (Next Heartwarming title:  Grounded for Christmas and not about coffee!)

The Sears of my youth was a vibrant, happy store.  I confess, the Sears we go to - the one closing down - hasn't had that vibe in a long time.  Most of the time I had to go hunt a check-out person, and most of the time, I had to correct the amount charged because sales items were never correctly marked.  Oh, and there's not a toy department at all at my current Sears.

Maybe it's memories, like going to Sears, that make us reach for small-town romances.  It's the yearning for going through the drive thru teller at the bank and having your small child recieve a lollypop from the teller whose name you know and who knows your name.

Maybe it's the front porch neighbors or the waitress who knows what you want to drink before you even sit at her station.

As for me, I'm going to go look for a department store Santa, and I'm going to load my family up in the car and drive through neighborhoods looking at decorations.  Change happens and it's up to us to make memories for 'now.'

Guess I don't need Sears for that.

But, I'll miss them.

Do you have a store you miss?