Sit Down Saturday with Leigh Riker

Hi, everyone! I’m here this morning to talk about HER COWBOY SHERIFF, the fourth book in my Kansas Cowboys series. This is Finn Donovan’s and Annabelle Foster’s story. After losing his wife and son to violence in Chicago, Finn (an ex-cop) has come from the big city to the small town of Barren, Kansas, hoping to find peace. Annabelle, on the other hand, can’t wait to find some excitement. She’s spent her whole life tied to her family’s local diner, and as soon as she sells it she plans to see a much bigger world. But, wait. She and Finn aren’t prepared to lose their hearts to an adorable, orphaned three-year-old girl who tempts Annabelle to stay and Finn to love again. 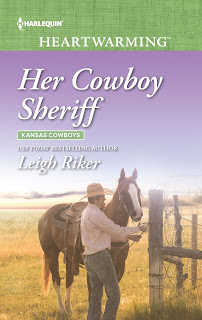 Sure, I'd be happy to answer a few questions about the book: First, what made you decide to write this story?

Annabelle was a secondary character before, and after her unhappy past I thought she deserved a better future. Finn appeared previously too as the new sheriff, a loner with a mysterious past. Obviously, these two needed to get together! Add little Emmie, and…ta-da, a fresh start for everyone in my latest Heartwarming romance.

Would you describe Annabelle for us?

From childhood, she’s been a plain Jane with brown hair and brown eyes. Love will transform her, but having lived under her strict, unloving parents’ thumbs, she has little confidence. In the beginning Annabelle doesn’t see what a strong person she really is, and that the escape she has yearned for may not be what she wants after all.

Several, but because there’s a lot of emotion in the story, as a breather I wrote a lighter scene in which Emmie runs into Finn, her hero, in the grocery store. He and Annabelle aren’t getting along at the time, but Emmie charms them—and, without permission, indulges in her favorite food. Doughnuts, smeared all over her sweet face. That can’t help but make Finn and Annabelle smile. Readers too, I hope.

You obviously love secondary characters. So which ones are next in the series?

Nell Sutherland, who seems to be the opposite of Annabelle. Nell, a born cowgirl, wants to stay right where she is. She has plenty of confidence, and I just knew she should have her own story. In THE RANCHER’S SECOND CHANCE, Nell hopes to inherit her grandfather’s spread and locks horns with Cooper Ransom (he appeared in the previous book too), but he has other ideas. This fifth story in the series will come out in May.

The sixth Kansas Cowboys book, THEIR COWBOY DADDY (working title), will be released in December. Three books in the series this year! And the others are still available: THE RELUCTANT RANCHER, LAST CHANCE COWBOY and COWBOY ON CALL. Enjoy!