The Musicals that Made Me by Syndi Powell 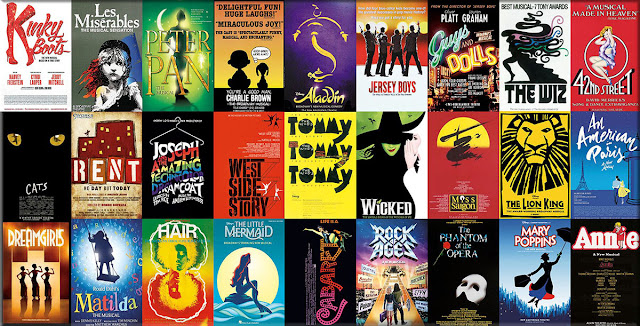 The Musicals that Made Me by Syndi Powell

I've shared before that I love musicals. So it should be no surprise to discover that several of them have had an impact on my growing up and maturity. here's a list in no particular order:


1. "Pete's Dragon" - When I was a child, we wore out the first record and had to get a replacement because we played it over and over. While I loved the music from it, the story of a dragon that most thought was a figment of a boy's imagination and turns out to be real? Yep, I could get on board with that. How badly I wanted my imaginary friends to become real.

2. "Annie" - My sisters and I used to act this one out, making dances to go along with the songs, especially that of "It's a Hard Knock Life". When they remade the musical for the silver screen with Albert Finney as Daddy Warbucks, we waited with baited breath to see it.

3. "South Pacific" - I remember watching this at my grandparents' house where they had it on Beta (anyone remember that short-lived entertainment system?). This was one of the first more "adult" musicals that I remember watching. The story appealed to my sense of romance, plus it had some great songs to sing at the top of my lungs. There is nothing like a dame!

4. "Sound of Music" - They started to showing this at holidays on TV when I was a kid, so I was able to watch the first half before having to go to bed. Eventually, I was able to see how the story ended. When I was younger, the romance between Liesl and her letter carrying boyfriend held my attention. It wasn't until I was an adult that I could appreciate the sexual tension between the Captain and Fraulein Maria.

5. "Les Miserables" - This was the first musical that I saw live. It still holds a special place in my heart for that reason. I identified with the ill-fated Eponine because it seemed that the boys I loved saw me as only a friend. The recent theatrical release with Hugh Jackman still wrings my heart.

6. "Phantom of the Opera" - I was able to see this twice in Toronto at the Pantages theater. The second time, my sister and I took my mom to see it. We got seats about six rows back from the front and didn't warn her that the chandelier would crash before her eyes. I think I enjoyed that second show since I could enjoy it again through my mom's eyes.

7. There's too many more that I could place here in this last spot: "Hamilton". "Dear Evan Hansen". "Miss Saigon". "Hairspray". "Beauty and the Beast".  "She Loves Me". "Come from Away". "The Lion King". "Newsies".  "The Greatest Showman". The list goes on and on. Each story filled with songs gives me something to add to my understanding of life. Because that's what a good story does - it shows what it's like to live life in someone else's shoes. I may not be able to live more than one life, but through story I can live thousands.

I'm proud to say that my niece is as big of a fan as I am. For her school's choir concert, she sang a song from "Joseph and the Amazing Technicolor Dreamcoat". I mouthed the words along with her as she sang.

If you asked me, I don't think I'd be able to narrow down to one favorite musical. Or even a top five. Or ten. My favorite is the one I'm currently listening to or watching. The playlist for my Musical section on iTunes could play for 1.7 days without repeating and still isn't complete.

By the way, I listened to the soundtrack of "Les Mis" while I wrote this.

What about you? Do you enjoy musicals? If so, which is your favorite?