Sit Down Saturday with Karen Rock, Author of Winning the Cowboy's Heart 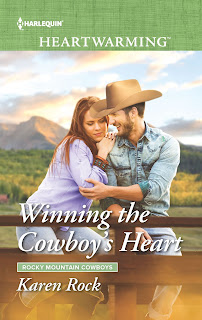 The Rocky Mountain cowgirl has her heart set on becoming range boss of the Cade ranch. But first she has to accompany the son of her family's longtime enemy--and her off-limits secret crush--on a cattle drive across Colorado. Discovering Heath shares her attraction only makes for a rockier road. Because Jewel has a sneaking suspicion that if she drops her guard, the cowboy might ride off with her heart.

They say opposites attract... and Heath Loveland and Jewel Cade, newly related step-siblings, certainly prove this is true in my latest installment to my Rocky Mountain Cowboys series, WINNING THE COWBOY’S HEART, Book Five! When I first began planning the series, I started with creating each member of both the Cade and Loveland families. Jewel, I envisioned, would be a bold, fierce, sassy cowgirl with a tender side she hides in order to seem as tough as the five older, cowboy brothers her father favored. Heath Loveland, on the other hand, would be a sensitive, country-music singing cowboy who’s played the role of family peacekeeper for so long he’s forgotten how to stand up for what he really wants ahead of others.


Now I never intended them to be each other’s love interest. In fact, I had another cowboy in mind for Jewel... one just as tough as she. Yet the deeper I got into mapping out each story, the more I kept coming back to Heath Loveland for Jewel- as crazy as it sounds given their families have despised each other for over a hundred years. Also, I didn’t see Jewel falling for a “nice guy” so to speak... but after writing Book One, Christmas at Cade Ranch, and getting to see Jewel interact with her family, I realized she didn’t need someone as tough as her... she needed someone who could help her get in touch with her softer side... someone who’d show her she was just as loveable when she let down her guard and embraced all sides of herself—something only sensitive Heath, with his music and his patient, listening, could do.


I always intended on Heath learning to stop being a people-pleaser and putting everyone else first.  Jewel stood out as the one character who’d show him that standing up for what he wanted wouldn’t make him selfish- it’d make him honest and authentic. To put those two main characters in a romance together, though, meant giving not writing each of them separate books as intended to make the total books for the series a nice, even ten... nope... my inner voice told me I have to be content with nine books because Heath and Jewel belonged together. Kind of like peanut butter and jelly. One’s salty, the other sweet... I’ll let you decide which is which 😉

The proof, they say, is in the pudding. When I went to write WINNING THE COWBOY’S HEART, the story just flew from my fingertips. There are moments in an author’s process where it seems like we’re simply taking dictation- that’s how loudly and clearly the characters are speaking through us. Jewel and Heath had such strong points of view, their stories, and particularly their interactions and dialogue, wrote themselves. Sometimes I’d wake up, chuckling, with some back-forth between exchange between them happening in my dreams. Good think I always keep a notepad beside my bed and all of those moments ended up in the book and no matter how many times I reread them, they still make me laugh.

Here’s one of those scenes that woke me up laughing. It’s a scene in Chapter One where Heath thinks he’s coming to his new step-sister’s rescue when he sees her struggling to change a tire on her six-wheel monster pick-up and learns she’s no damsel in distress:

“Not bad for a Neanderthal,” Jewel drawled behind him.

“Neanderthal?” When Heath turned, she’d already fitted the spare into place and stretched a hand out for the wrench. He passed it over, impressed as she secured the new wheel faster than he’d removed the old.

“Yeah,” she grunted as she tightened the last bolt. “Primitive man.”

She sat back on her haunches and eyed her tire change. “You practically clubbed me over the head to get the tire.”

“I’ve never raised a hand to a lady.”

Her gaze collided with his. “Don’t get your panties in a twist. And I’m no lady. Or some damsel in distress. Play your hero act with your fiancée.”

With that, she tossed the long wrench in her truck bed, hopped behind her wheel and started up her powerful engine. It throbbed, loud, in the night air. Before she left, she leaned out her window, her expression smug. “And you’re welcome.”

“For what?” Shouldn’t she be thanking him?

“For protecting your fragile male ego. See you in court!” She shifted into gear, then raced off, her tires kicking up gravel.

What else would you like readers to know?
My current blog tour is continuing through this weekend with multiple places to enter as many times as you like through Monday. If you want to enter for the prize pictured below, visit my website! For more news about me, like my page on Facebook, follow me on Twitter, and on Instagram to stay in the loop about upcoming releases and contests. You can check out WINNING THE COWBOY’S HEART, on sale now, at Amazon, Barnes and Nobles, eHarlequin and iTunes. Thanks so much for stopping by 😊 Wishing everyone a great weekend! 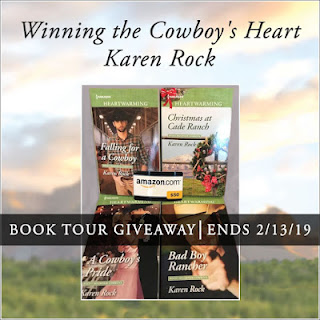