Last year, on New Year's Eve, I wrote a blog post about what I imagined might happen in that upcoming year. I like to dream big dreams and put them out there... you never know, right? Well, my big dream was that I wanted someone to abandon a parrot and drop it on my doorstep so that we'd have no choice but to take it in.

Have I mentioned how much I love parrots?

Anyway, the post was mostly a joke! I didn't think it would happen, but then our budgie died, and I happened to be looking at parrots on Kijiji (as one does, right? ;) ) and there was this Quaker parrot that needed a home, and the price was just so reasonable... 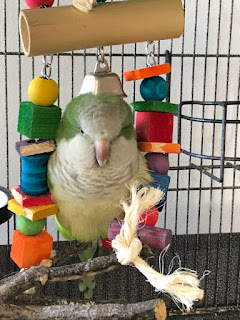 Miraculously, my husband agreed, and Pichu (who has since informed us that his name is Baby by correcting us every time we called him Pichu, which was the name the last owners gave him), came home with us. The picture above is Pichu-baby cuddling with a new toy he likes a whole lot.

Pichu is so much fun! He talks--but only to tell us when he wants something. He'll ask for his stuffed animals, which he calls his "cocos." Our last bird was named Coco, and since they were friends, he figures all birdie friends (even stuffed ones) are cocos. He'll call for "the boy", which is our son, or he'll ask for "mom," Yours Truly. He'll say "good boy," "good bird," "night night" and "love you." The "love you" is a little garbled, but I hear it. :) 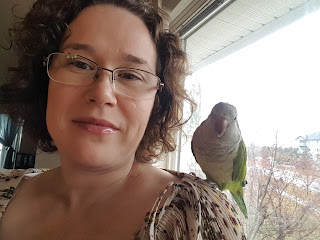 And he is my writing buddy. He hangs out with me all day and he sits on my shoulder while I write. He gives kisses and growls at anything that moves outside the window. He's a very good guard parrot.  At least, he figures that's his job.

He and my husband have a more tentative relationship, but Pichu has finally conceded and accepts him as "the boss" around here. Pichu was more than willing to take that role!

He's my buddy, and I finally have my parrot.

Up until 2010 I was not a cat person. Not that I didn’t like cats…or dogs, I just didn’t have time for them. Then one July day I went to the Dollar General store near me and came home with a kitten. No, they don’t sell kittens at my Dollar General, but there was this tiny little thing in the hot parking lot and I couldn’t just drive off and leave him there. 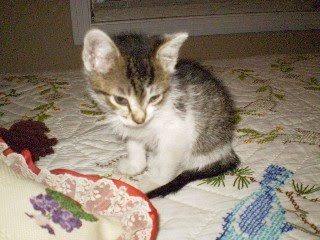 I actually thought he was a she and named him Mazie. As you can see in the photo he grew from a cute kitten to be a beautiful tabby. 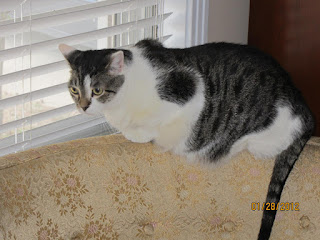 After Mazie, I thought I wouldn’t get another cat, but something drew me to our local shelter, and I came home with another tabby. This one, I knew from the get-go was a girl and named her Suzy Q because she was so bouncy. She’s still bouncy. And from the first night, she spent half of it curled up on my chest. She also helps me with my writing. 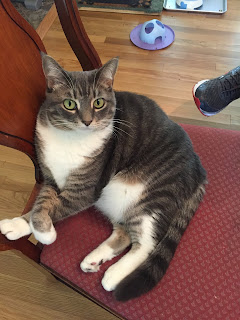 I never meant to get another cat, but last winter when it was soooo cold, a tuxedo cat knocked on the door. Well, not literally. But he did sit on the doorstep and look pitiful. So I kept him in my pottery room where I have heat, meaning to find him a good home. He’s still here. 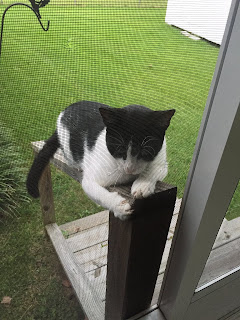 So how about you? Are you a cat person? Has one ever adopted you? ‘Cause you do know—cats are the boss.