Posted by Janice Carter on April 23, 2019
The Monday after Easter offers for many people a small pause in celebrations and family reunions for reflections on the story behind this special weekend. But news and social media posted grievous reports of yet  more tragedies and loss of life in far-off countries and at home, too.
So late on Easter Sunday night, I forced my mind from current troubled times to the memory of an Easter four years ago when my husband and I spent Orthodox Greek Easter with long-time, precious friends on the island of Crete.
We met Minas and Marina in 1973 on our travels through Europe and Asia to Australia. We'd decided to take a break from days on buses, trains and boats to teach English on Crete, a place we came to love so much we stayed for six months. I met Minas, a bank employee by day and English teacher by night, at the evening school where I'd been hired. Almost immediately, he, his pretty wife Marina and their infant son 'adopted' us - helping us find rooms to rent, driving us around the countryside and introducing us to the customs, culture and food of Greece and Crete.
Our friendship continued across sea and ocean through the next 40 odd years with Christmas cards, email and packages to and from Crete. Our children became adults, grandchildren appeared on the scene as did various health problems, unfortunately. In 2015, my husband and I set off on a European adventure and our first stopping-off point, we'd decided, had to be Crete. Who knew when - or if - we'd have another chance to see our dear friends again? Luckily for us, we arrived days before Orthodox Greek Easter.
Minas and Marina hosted us in their apartment in the capital city of Iraklion and then the day before Good Friday, drove us to their country home in the mountain village of Fodele - the birthplace of the Renaissance painter, El Greco. 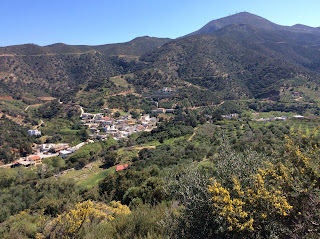 Friends and family soon arrived and food preparations for the Easter Sunday feast began. Everyone helped out - except the Canadian visitors who were encouraged to explore the village and its surroundings. We wandered through old and newer churches and happened upon a strange sight that was a local Easter custom - an straw effigy of a figure representing Judas Iscariot on a raft in the middle of a small lake. On Good Friday night the raft and effigy would be set ablaze. 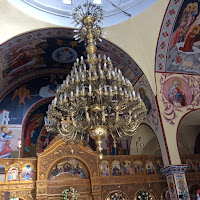 We also learned that sometimes after midnight mass on Good Friday, a few villagers tended to get carried away by their emotions and fire guns into the air. I decided to forego the service and stay behind with the rest of the women! The men braved the church service but fortunately villagers were more subdued that year and no shots were fired.

Days began with breakfast outside on the terrace and oranges and lemons plucked right from their own trees. I haven't had an orange that sweet since.

Early Easter Sunday morning, large joints of lamb were strung on a spit for the outdoor oven, dolmades (stuffed grapevine leaves) were made as well as casseroles like moussaka and pastitsi - and, of course, there were pastries and cakes for much later.

It was a completely different Easter for us. Our gracious hosts, Minas and Marina, their lovely extended family and friends shared a meal, stories, jokes and concerns about the world in an enthusiastic blend of Greek and English with two awed tourists. Its memory was the best cure for my world-weary blues this past holiday weekend.