It's hard to believe, but HOLIDAY KISSES, my April release, is the fifth book in my Butterfly Harbor series. When this series first started, I could only dream of it going beyond three and this year, there will be two more! Butterfly Harbor is such a lovely place to visit and I hope these little tidbits of behind the scene info make you want to spend some time there.

From the moment Calliope Jones first stepped on the page (in RECIPE FOR REDEMPTION, BH #2), I knew she'd demand her own story. She's just that type of character. She's also very quirky, unique, and she's always one for a heart-to-heart talk. Enter Xander Costas...Calliope's opposite in every way.


You say Calliope is a quirky and unique character. In what way?

Let's just say she's...magical. A lot of that is up to the reader to interpret, but she definitely has a way with nature and of course the butterflies the town is known for. Some people are more connected to the earth than others. Calliope fits that to a perfect T. I have called her Butterfly Harbor's answer to Hallmark Channel's The Good Witch. She always has the best of intentions and is rarely knocked off kilter. Until, of course, Xander Costas arrives in town to design the butterfly sanctuary. They do not see eye to eye...on just about everything,


Calliope's family history is pretty sad and her current situation a tad unique. Can you share a bit about that?

I'll be the first to admit I didn't know much about Calliope when I started writing her story, other than what had happened in the previous books. I knew she was kind, understanding, patient, and non-judgmental. As with most of my heroines, I knew she was strong and independent, but I had the feeling she came from adversity. She was raised by her grandmother due to her mother's severe mental illness. I thought addressing that and showing that the past doesn't have to determine the future was important. Life has not been kind to her mother, but Calliope doesn't resent that because that life presented her with a little sister. Stella is a lot younger than Calliope, nearly 20 years younger, but in all ways that matter, Stella is Calliope's. Facing issues and problems head on is a big part of who Calliope is, and she is determined that Stella do the same.


It sounds as if Xander Costas throws a bit of a monkey-wrench in Calliope's status quo.

To say the least. Calliope knows from the second she meets Xander that her life is about to get very complicated. Even easy-going Calliope can be resistant to change and she fights it until she realizes she's been presented not only with a challenge in showing Xander just how important this project is to the town and the butterflies it will protect, but an opportunity to experience something she never thought she would. Xander, on the other hand, is a bit more intrigued and curious than Calliope is. He's never met anyone like her, who has? But she's quickly becoming someone he can't stop thinking about,


Is there anything they have in common?

Family. Xander's trying to save his family architectural firm, which is the reason he's taken the job as designer for the sanctuary. He's also dealing with his father's failing health and his mother being overwhelmed by caring for him. He's got a brother he's at odds with over the business and three sisters, the youngest of which is dealing with the death of her best friends. There's a lot on his plate, but he's juggling for the time being. And he's finding a bit of solace with Calliope and Stella, who takes to him immediately. How Calliope is about Stella is how he feels about his family. And that is what initially brings them together and to an understanding.

What scene did you have the most fun writing?

There are a few similar scenes where Calliope is trying to get Xander to turn of his "citified" brain, and to try to connect to the non-cemented world around him. To just sit still and listen. Not to traffic or music, but to the ocean. To the wind. To the leaves rustling beneath the beat of a butterfly's wings. That's where a lot of the magic between these two happens.

What do you hope readers take away from this story?

That sometimes the universe has a plan we can't always see. That someone's past doesn't have to determine their future. Love really is the most powerful force in the world. It can change people's lives; it can change their hearts. That's what this, and every Butterfly Harbor story is about. It's what every Heartwarming is about. The power of love. 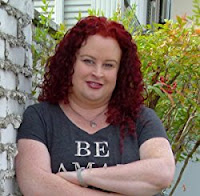 USA Today and national bestselling hybrid author Anna J. Stewart writes sweet to sexy romance for Harlequin's Heartwarming and Romantic Suspense lines. Early obsessions with Star Wars, Star Trek, and Wonder Woman set her on the path to creating fun, funny, and family-centric romances with happily ever afters for her independent heroines. A former RWA Golden Heart nominee and 2018 Daphne DuMaurier finalist, Anna lives in Northern California where she deals with a serious Supernatural , Sherlock, and Jason Momoa addiction and surrounds herself with friends and family. When she's not writing, you can find her at fan conventions, at her local movie theater, or building her client list for her content editing services. You can read more about Anna and her books at www.authorannastewart.com