Posted by Janice Carter on May 28, 2019
I think I can safely say that spring is finally here in my part of Canada, southern Ontario. Considering this is the very last week of May and summer is officially only a month away, I have to add "it's about time!!"
On Mother's Day weekend my daughter and I joined the hordes of people from all over Toronto and beyond for 'Sakura Hanami', or cherry blossom viewing. Judging by the street closures and packed transit, few were discouraged  by the cool, overcast and slightly drizzly weather. 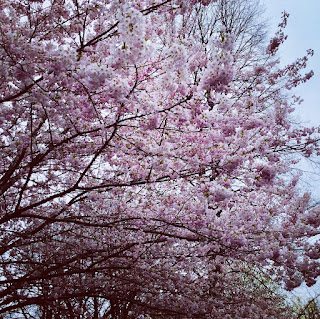 The tradition of cherry blossom viewing in Toronto likely began shortly after the cherry trees were planted in 1959 - 60 years ago. They were a gift from the government of Japan to the city and the story behind that can be found here - www.sakurainhighpark.com  That dark and shameful episode in my country's past history might weigh on the minds of an older generation of Japanese-Canadians at viewing time,  but for most of the thousands struck with sakura fever, the occasion is a celebration of spring and the beauty of Nature. 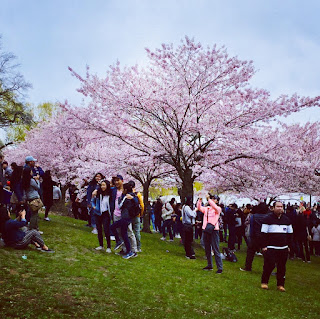 It's also an occasion to wear traditional clothing or beautiful costumes and gather for family picnics beneath the heavy boughs. 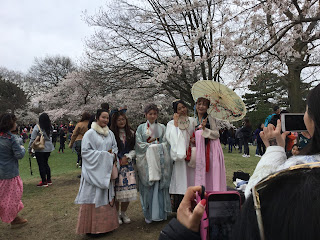 Still, this year sakura hanami was more of a tantalizing glimpse of spring rather than the real thing. A week later, our first arrival on Garden Island where we have a summer cottage was almost as inauspicious. Everything had been delayed by the cold 'spring' and the water was high, flooding gardens and docks. But the great meadow - the heart of the island - dazzled with daffodils of all varieties. 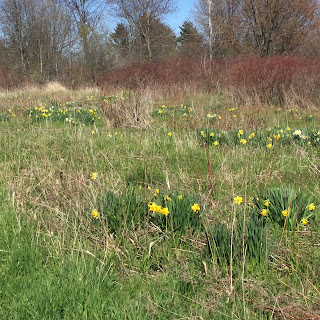 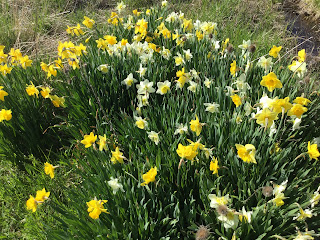 The  bulbs were planted over a few decades by my husband and have persisted and spread, in spite of invasive weeds,  bushes and competing wild flowers.
Our annual 'daffy' viewing is a more modest affair than sakura hanami and my special clothing consists of jeans, fleece and rain boots, but the end result is the same - awe, and a lifting of spirits after the long winter. 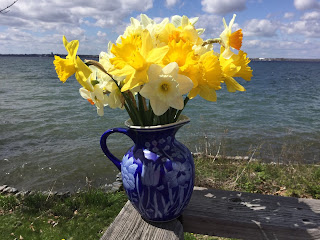