A Picture is Worth....by Janice Carter

....a thousand words, as the old chestnut goes, but in this case, the picture is the sum total of 70K words, the average count for a Heartwarming romance. No, this post isn't a shameful promo of my upcoming July release - you'll have to wait for that! - but a look back to some cover art of Harlequin novels through the years.
My first romance, an Intrigue, came out in the late 80s and I remember being surprised by the cover. Granted, it did represent a scene from the book, but it looked as though it should have fronted a comic book (what we called graphic novels back then). The characters were wearing clothes I hadn't pictured at all; in fact, my heroine's dress was described as 'jade green' in the book and after the cover art was done, I was asked to please go through the galleys and change all the 'jade green' references to 'turquoise'.

Shortly after the book was published, I was excited to be invited to tour the former Harlequin head office in Toronto. The halls were lined with large framed posters of cover art through the years - from old Mills & Boon covers to later Harlequins ones. They were typical of the eras in which they were published and the style of my book fit right in. I also learned how the covers were done: a tableau of a scene was created using actors, photographs were taken and finally artists completed the process by painting the scene.
My second book cover was an even more obvious shout-out to pulp fiction, with flashy gold trim and characters who could have been action heroes. I got used to it eventually!  :) 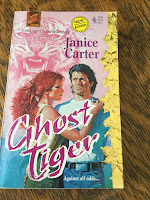 To my surprise, a couple of my covers didn't feature people at all. The setting of this one looks serene and peaceful, but the dark night hints otherwise, evoking the ominous undertones of the story inside.

The trend shifted at some point to the use of real people on the covers and I liked that. 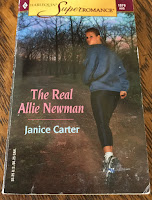 Nowadays apparently, stock images are used as cover art. That can lead to both positive and negative results, as sometimes images don't accurately reflect written descriptions. But perhaps that isn't the important part of a cover at all.
Notes from the recent Heartwarming Summit indicate that covers are crucial to sales. Something has to compel a person to take a particular book off a shelf and to then read the back blurb. And that something of course, is the cover.
So while I've sometimes had mixed feelings about my covers, I've always come to cherish and love them. The represent the hard work and the unbelievable thrill of all 'births', don't they?
What are some of your favorite covers?

My current favorite naturally, is this one. 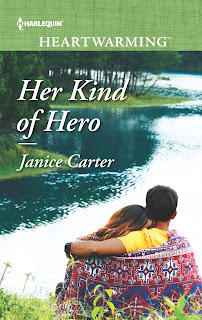 Thanks for joining!  Janice Carter