Sit Down Saturday with Janice Carter

Posted by Janice Carter on July 27, 2019
Welcome to Sit Down Saturday with Janice Carter, author of  this July release, Her Kind of Hero.

What exactly is the heroine's kind of hero?

When Matt and Dana were teenagers, they met through a potentially life-endangering situation that turned out to be for both of them, also a life-altering event. They didn't meet again until 20 years later, but for all of that time, Dana's mental image of her rescuer hero was a stereotypical one. When they finally did get together, Matt was definitely not the hero she'd pictured all those years.

So eventually she realized that...

The man Matt grew into was precisely the kind of hero she needed in her life.

Their meet-up was clearly unusual. What led you to create that scene?

Two things, both true. One was a newspaper article about a rescue on a Toronto subway track and the other, a bullying incident I witnessed years ago - also on a subway platform. Fortunately, both those incidences also ended safely for the people involved.

Dana and Matt come from to different worlds. How did you manage to reconcile their differences to lead to a HEA?

Because they had very different family situations growing up, they also had different viewpoints - socially and economically. But beneath the surface, their values, respect and compassion for others meshed. That allowed them to see the vulnerability in one another and to have the empathy necessary to love.

Do you have a favorite secondary character?

Certainly Esperanza, Matt's mother who, as Matt says, "in spite of all the troubles in (her) life, she never lost hope."
I'm also very partial to Rosie, his younger sister. She's battling his tendency as an older brother to 'hover', complicating her own struggles for independence as a young woman with MS. But they also have a typical brother-sister relationship with all the teasing involved.

Favorite Scene?
So many! Of course, I'm biased. :) The camp scenes were fun to write and my experiences as a teacher and mother helped. The community organization scenes also came from personal experiences.
Here's a snippet from when Matt and Dana were still getting to know one another. Setting: Camp Hope, by the lake

Her gaze skimmed across his torso, lingering on the tattoos and the puckered skin of the bullet scar inches below the join of shoulder and chest. The urge to get under the water, away from that frank inspection and the questions in her eyes compelled him to dash ahead, churning the water behind him until he reached the right depth for a nosedive. When he surfaced, she was still standing at the water's edge.
"Come on! It's not cold."
"I think I see you shivering," she hollered back.
If I am, he was thinking, it's not because of the water. "Dare you."
"That stopped working for me long ago."
"I'll warm you up if you make it this far." Her hesitation prompted him to add, "Promise."
"That works," she shouted and ran toward him, diving under and coming up inches away. Her teeth were chattering as Matt drew her close, making good on his promise.

It's available now at all online bookstores!

Thanks for joining Sit Down Saturday with Janice Carter! 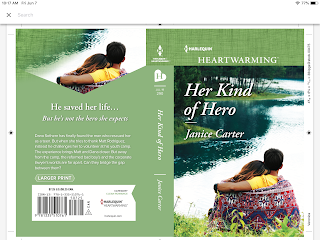