To all the dogs I've loved before by Syndi Powell 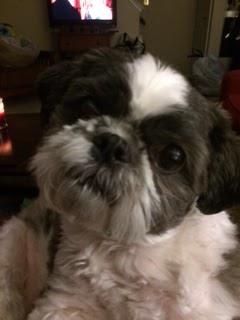 There's just something about a dog, isn't there? Maybe it's their cuteness when they are a puppy. Or the wagging tail. Or those eyes that look at you with such longing and tenderness. Or the way they love unconditionally. Don't get me wrong. I love cats too and have owned one (my dearest Diva below), but dogs have a special place in my life. 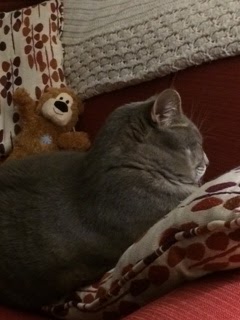 I've loved many dogs in my life, starting with my very first, Midnight. I had been afraid of dogs before this, and my Uncle Mark decided that our family deserved a dog. He adopted one from the animal shelter, a black lab terrier mix. He was the runt of the litter, so he was tiny. But he was ours for more than fourteen years. He had the lovely habit of passing gas then running out of the room, leaving the odor behind.

After he died, I didn't want a dog for a long time. But then that itch started, and my sister Sherrie and I adopted a beagle from the animal shelter, Kohlby. He looked as if someone had put black eyeliner around his eyes.

My other sister Sue and her husband adopted Furio, a black lab and German shepherd mix who loved to play fetch. A year after, he was joined by Phoebe, a black and white speckled short hair Australian shepherd who was the laziest dog ever. Once babies joined their family, they were both very patient with them, although my sister worried that Phoebe would lay on one of her babies. They also adopted Gracie Lou, a high energy dog who died too early when her spine broke after a tumble on the ice. Then along came Shiloh, a beagle who loves to bay at you to remind you that he's got his eye on you. They recently adopted a black lab named Cody, another high energy dog who loves to jump.

After my sister Sherrie got married and had kids, they adopted Rocky and later Ladybird. Ladybird was the sweetest dog I've ever known. She would look at you with those sad eyes and lick your hand as if to say, "I love you so much it hurts." After Rocky was gone, a pit bull mix named Reno joined the family as a temporary foster dog, but he won over their hearts and became a permanent part of the family. He's another sweet dog that loves to shower you with affection.

When my mom met my step dad, he brought along two dogs as a package deal. Evie was a blond Bouvier de Flandres which seems to be Belgian for huge dog. Bella, a poodle terrier mix, despite being the smaller dog ruled the roost. She had no problem reminding everyone who was the boss. They were joined by my stepbrother John's black Bouvier, Pinot, when he was on business trips. When I was living with my parents and getting cancer treatment, he liked to stay by my side. If I was taking a nap or resting in my room, he'd walk down the hall and poke his nose in the room to check up on me. Once Evie and Pinot died, Katie entered my parents' lives. She's a brindle Bouvier with a lot of energy. Two summers ago, we tried to teach her how to fetch using a Nerf gun. We loaded the gun with Nerf balls and shot them towards the back of the yard, but she wasn't interested in running after them. She was more content watching them sail through the yard from the shade of the patio. The picture below is from last year, still in her puppy stage and still growing. 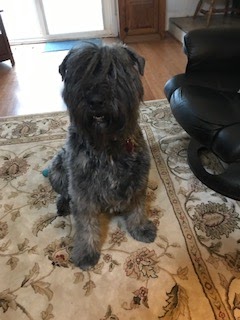 At my house, I have Ceasar, a brown and white Shih Tzu whose picture started this blog entry. He's taught me a lot about life and faith. For example, he whines when he wants something, but I know that what he wants isn't good for him. That made me think. How many times have I whined to God about something I wanted but didn't get because it wasn't good for me? Too many times to count!

In my two upcoming books, Their Forever Home and Soldier of Her Heart, dogs play a part of the story. In the first, the heroine takes her blond Bouvier Evie to work with her for protection. In the second, the hero suffers from PTSD and gets a black lab Phoebe as a therapy dog to help him. It was fun to remember the dogs they were named after and giving some of their quirky habits. 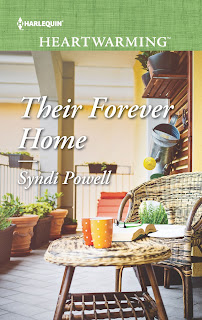 There's just something about a dog! What about you? Are there dogs in your life that make you smile?