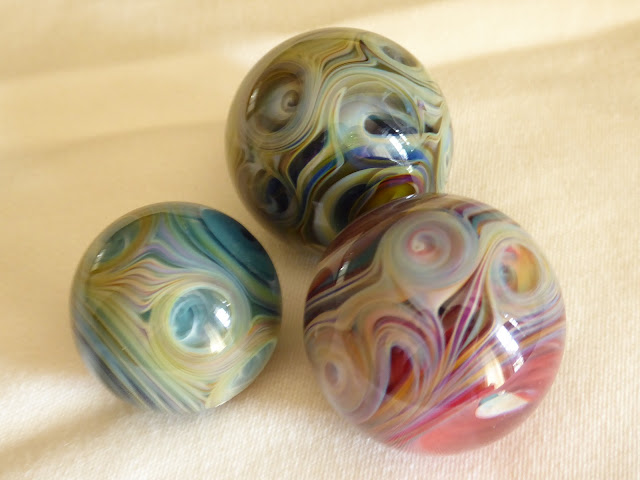 I once saw this on a sign:  “You only get old when you’ve lost your marvels.”  By that reckoning, I’ve known people who were old at 17 and young kids in their 90s.  By the way, I want to stay in the second crowd.  My problem tends to be a whole lot of marvels.

I love rocks and have far too many hanging around the house.  I've even got a rock  tumbler.  It’s incredible how many different kinds of rocks and gems there are.  Luckily, I’ve never considered rubies and emeralds to be necessary, so that leaves me free to love all sorts of less expensive and still gorgeous stones.  Did I say no rubies or emeralds?  Let’s say I don’t need to have gem quality stones to be happy.  I’ve found some non-gem quality stones that suit me well.

I also have a collection of sapphires in their less popular hues.  Did you know that sapphires come in every shade of the rainbow except ruby-colored?  And the reason there aren’t any ruby-colored sapphires is because if a sapphire is found in that color, it’s called a…ruby.  That info became part of my marvels; it's the same stone, different names.  Most rubies fluoresce, but so do lab-created ones and some rhinestones.  (I had brief images of amazing riches after I got some jewelry findings home from a yard sale and found two loose rhinestones that flashed gorgeous color under a black light, but I’m also realistic--they were rhinestones).

Another marvel I discovered in recent years is marbles.

I went to a marble show out of casual interest and was stunned.  I used to think a fancy marble was a cat’s eye versus a plain glass one.  Then some enterprising toy companies started making a few other varieties.  Those are beautiful, but still factory produced.   At a special shop, I also learned that some people buy slag glass (factory leftovers) to make marbles.  That sounded nice, but time-consuming for what is basically still mostly plain glass.

Now I’ve learned that sophisticated marble-makers generally use a special glass similar to the kind used in baking dishes.  There are swirls and sparkles and amazing designs.

You can look into some marbles and would be convinced they are two or three times as deep as they possibly can be--there’s nothing like optical illusion to bend your brain.  On the other hand, maybe they are that deep and the interior actually is bigger than the exterior.  That’s true of most people, isn’t it?

Rocks and marbles are only two of my marvels.  What kind of marvels do you have?  I’m always looking for a few extras!