Stepping on the Path: Sit-down Saturday with Virginia McCullough

Posted by Virginia McCullough on August 24, 2019

Welcome to Sit-down Saturday, with Virginia McCullough, author of the new release, A Family for Jason.
Stepping on the Path
It’s been said that a book is a journey. If that’s true, then our characters are traveling on a path to somewhere. When I was walking on a trail in my neighborhood the other day, it occurred to me the settings I create almost always include walking and bike trails and paths, or perhaps a long stretch of beach. Sidewalks, roads, and even flowing rivers count, too, because they’re all about movement and travel, twists and turns and detours. Bridges or causeways often turn up, too, because paths need to be connected sometimes. 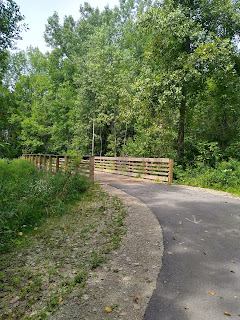 I’d not thought about it before, but our readers almost always meet our characters when they’re struggling to find their way on a path or they’re trying to do some emergency road work, so to speak. They could be in the midst of a fight to jump off an old path so they can take off on a quest to find a new one. They could be forced to take a journey they’d just as soon skip altogether.
As teenagers deeply in love, Ruby Driscoll and Mike Abbot had once shared a life path, but tragedy and scandal knocked them off that road to their future, split them up, and sent them on their way to find a new way forward, and not together. Their paths haven’t crossed for twenty years. They’re both strong individuals, though, so they managed to successfully navigate a journey to satisfying work and Mike even has a son. 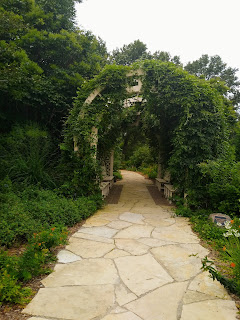 No journey is without its decision points and detours, and Ruby and Mike each faced a fork in the road. Mike chose a path that led back to Bluestone River, the best place to raise Jason, his traumatized, now motherless son. On the other hand, Ruby agrees to detour to Bluestone River but has no intention of settling in for long. She’s just lost a job she fought hard to land, so she has to find a new direction. Her best friend, Emma O’Connell, needs her help, which is the only reason Ruby would consider stepping foot in Bluestone River again. Once Emma is recovered from her serious surgery, Ruby’ll pack up and be on her way with her dog, Miss Peach.
A reunion story at its heart, a little boy may be Mike and Ruby’s first “bridge” to cross to reconnect their paths.

Ruby rubbed the fur on Peach’s neck, thinking how peaceful it was to watch the kids play. This playground had been added to the Bluestone River Park when Ruby was about the same age as these children. Her gaze settled on one little boy staring at her and Peach from one of the swings. He was moving back and forth in a lackluster way, dragging his feet across the protective rubber mat under the swing. When he got off the swing and began walking toward them, Ruby took hold of Peach’s collar and told her to sit. “Good girl,” she said when Peach settled on her haunches. “Now stay. And no barking.”
When the boy was still a few yards away, caution led Ruby to greet him. “Hi there. My dog is friendly, but she doesn’t know you.” She indicated that he should come to her left side, opposite the dog, who sat at her right. “You’re welcome to say hello.”
The boy nodded solemnly, but then a faint smile appeared. As he inched ahead, Peach’s tail swished across the ground.
“Her name is Peach. I’m Ruby.”
The boy didn’t say anything, but the smile stayed.
“Here comes somebody you know.” Ruby nodded toward a woman hurrying across the gravel with a toddler planted on her hip.
“I think your little boy likes my dog,” Ruby said. “She’s very gentle, so it’s okay if he comes a little closer.”
“Do you want to do that, Jason?” the woman asked.
That was all the encouragement the boy needed in order to come close enough for Peach to start sniffing his shoes.
“This is Jason. He’s one of the kids I watch after school.” She patted the toddler’s leg. “This is my little one, Molly.”
“Well, if it’s okay with you, Jason can pet the dog. Peach is pretty sweet.”
Jason’s big blue-gray eyes opened wide as his smile spread across his face. He moved closer and stroked Peach’s back.
“You’ve made a friend, Jason.”
The boy glanced Ruby’s way, but still didn’t speak.
“He’s kind of quiet.” The woman patted the top of the boy’s head. “That’s okay. You’ll talk when you’re ready.” She flashed Ruby a pointed look.
She was trying to communicate something, but Ruby didn’t know what. Not exactly. But the thin pale lines and telltale puckering of burn scars on the boy’s forearms might have something to do with his silence. 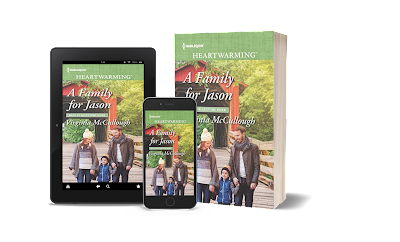 Today is the grand finale for the blog tour for A Family for Jason hosted by Prism Book Tours, but you still have time to visit a stop or two and enter the giveaway. 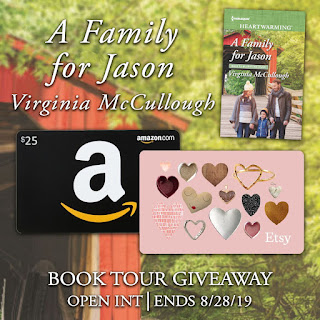 
Born and raised in Chicago, Virginia McCullough has been lucky enough to develop her writing career in many locations, including the coast of Maine, the mountains of North Carolina, the U.S. Virgin Islands, and currently, Northeast Wisconsin. She started her career in nonfiction, first writing articles and then books as a ghostwriter and coauthor. She’s written more than 100 books for physicians, business owners, professional speakers and many others with information to share or a story to tell.
Virginia’s books feature characters who could be your neighbors and friends. They come in all ages and struggle with everyday life issues in small-town environments that almost always include water—oceans, lakes, or rivers. The mother of two grown children, you’ll find Virginia with her nose a book, walking on trails or her neighborhood street, or she may be packing her bag to take off for her next adventure. And she’s always working on another story about hope, healing, and second chances.


A Family for Jason is book one of her new series, BACK TO BLUESTONE RIVER. Book two, The Christmas Kiss, is scheduled for a December release. An author of both fiction and nonfiction books, she’s also a ghostwriter/editor and a coach for other authors at various stages of their careers. Her other Harlequin Heartwarming books include: Girl in the Spotlight, Something to Treasure, and Love, Unexpected. She also writes award-winning women’s fiction, including The Jacks of Her Hart, Amber Light, Island Healing, and Greta's Grace. All Virginia’s stories explore themes of hope, healing, and plenty of second chances.
You can add you name to Virginia’s mailing list at www.virginiamccullough.com and visit her on Facebook and Twitter