Posted by Janice Carter on September 24, 2019
Well it's official. Summer ended yesterday at 3:50 a.m. with the arrival of the autumn equinox. I'm not sure what time zone that refers to but I do know I was most likely asleep and missed the event. However, this morning an overnight meeting of cool and warm air above the meadow behind our cottage was evidence that a different season had begun. 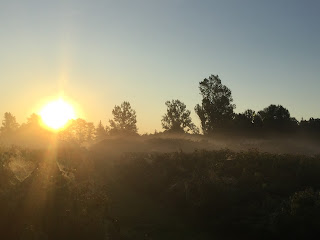 I love autumn and am happy to live where four seasons keep us on our toes - surprising and disappointing us and definitely keeping alive weather conversations everywhere. I'm usually caught off-guard by how quickly summer fades into fall because by the end of July, it seems endless. But this summer was a literal steamroller as the days sped from one excitement to the next. Here are some of my personal highlights:

1. 50  That's the number of years my husband and I have been married in 2019. The actual anniversary falls on our Canadian Thanksgiving weekend but because there was a lot of family on the island at the beginning of July, we were treated to a surprise party that included a wonderful scrapbook of photos from 1969 to the present (were we really that young??), a very funny 'roast' and of course, Champagne. The celebrating continued when my husband accompanied me to NYC at the end of the month for RWA. 2. The Romance Writers of America Conference

Deciding to go to RWA this summer was a no-brainer. My second Heartwarming was released in July, the location was close to my hometown of Toronto and my husband hadn't been to NYC since his teens. Highlights included meeting fellow Heartwarming authors, all every bit as graciously welcoming as I'd imagined; the Harlequin parties and other events were as spectacular as ever and NYC itself - despite the heat and crowds - awesome. 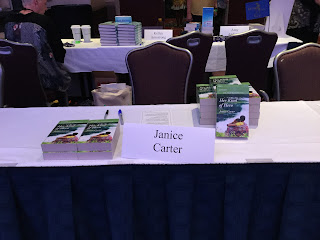 3. Cottage Life
The island where we summer each year recovered from a very wet spring and flooding, bursting into greenery everywhere. But this summer, especially in late August, there were hundreds (some islanders claimed thousands) of Monarch butterflies. They were all over, flitting among swaths of sunflowers and goldenrod and roosting in tree branches at dusk until they disappeared in mid-September. We also had a plague of frogs, leaping frantically as we walk in the grass around the cottage. The butterflies have gone, but the frogs are still here. :)

4. Contract, contract!
A huge burst of excitement occurred the first week of September with the offer of a two book contract from the Heartwarming team. I admit I was taken aback as well as super surprised because I'd never submitted a proposal that involved two books tied by one story. A best-case scenario, I'd rationalized, was that I might sell one book and have to combine both stories in it. But now I get to write about 4 people instead of 2 and...oh my, I just looked at the calendar. I better finish this post!

5. Sybil Jean
I'm certain my daughter and her partner were fans of the Downton Abbey TV series because they chose that name for their first child and my first grandchild. At one year old this month, her personality is already living up to her dramatic name. She's a charmer and we got lots of Sibby-time at the cottage, which was the highlight that superseded all of the above.

What was a summer highlight for you?