Hard to believe, isn’t it, but it’s September already! This summer I was between contracts and took a break while waiting to hear on a new proposal. The good news came in—rather unexpectedly—while I was on vacation in Portland, Maine where I, of course, did my happy dance with my family. I’ll be writing two more books for Heartwarming in my Kansas Cowboys series! 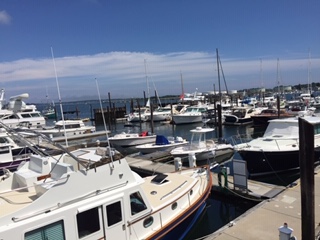 In the meantime, TWINS UNDER THE TREE (book #6) comes out in October. This one is Jenna and Hadley’s story. I knew when he first stepped “on stage” in THE RANCHER’S SECOND CHANCE (book #5) that this rugged cowboy with a troubled past needed to get his happy ending. It was great fun to reform this bad boy in a book of his own, and on page 1 the suddenly widowed Hadley with a pair of newborn twins won my heart. Jenna, on the other hand, didn’t see things that way. His former wife had expected Hadley to leave town, and their babies, and Jenna had agreed to serve as guardian if/when he disappeared. How to get him and Jenna together? 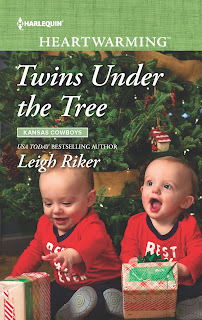 Here’s an edited excerpt from the book (Earlier, Jenna had refused to let Hadley use part of the money his wife left for the babies under Jenna’s control, which would have helped Hadley invest in the rundown ranch he’s trying to revive):

Jenna left the house and walked down to the barn. She found Hadley leaning against a stall, staring at the floor, his arms crossed. “What’s happened?”

“Nothing good.” He told her about a call from the bank; his loan had been denied. A quick, upward glance at Jenna. “I’ll have to return the new bull. Would have made us some nice Angus babies.”

“Then what are you going to do about the ranch?” For a long moment she watched his face, strong and rugged, a muscle ticking in his jaw. She saw the bleakness in his electric blue eyes. And took a deep breath. “You asked me once for part of Amy’s money—the twins’ money— and I know you need the bull—”

“What are you getting at?”

“I haven’t yet set up that trust I mentioned for Luke and Grace. There’s plenty of time before they’ll need that for college. I’m willing to advance some of the money after all so you can do whatever you need to,” and because she couldn’t bear the beaten look on his face. “I was wrong before, Hadley. If you succeed here, there is a benefit to the twins in being able to keep their lives stable.”

“None, except we do this as a loan.” A real turnaround on her part. “Unlike the bank, I don’t need to go through anyone else. Do you want it or not?”

“What interest will you charge?”

“Interest-free.” She could almost see the possibilities run through his mind.

He looked toward the pasture outside the barn where the bull was grazing. “What if I default?”

“Jenna, I have no collateral to offer.”

“You are the collateral. You don’t leave here before I get the money back for the twins. I know you can make the ranch profitable.” She had to bend to see his downcast face then smiled into his eyes. “I know you’ll repay every penny. Do we have a deal?”

“What do you think?” Hadley laughed a little, erasing his dark expression. “That’s the sweetest deal I’ve been offered all day—from the prettiest banker too.”

Are you ready for fall to start? Have you begun your Christmas shopping? What’s your favorite season of the year?