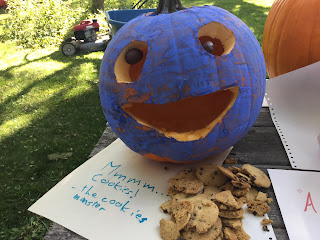 There are pumpkins everywhere these days: some are plastic and sitting on front porches and some are in huge grocery store bins. All are awaiting the end of this month when pumpkins come alive as grinning, spooky creatures lighting up the night.
These squashes apparently originated in North America and seeds, dating as far back as 5000 B.C., have been found in Mexico. The name pumpkin, supposedly taken from the Greek word 'pelon' (meaning a large melon), has traveled through many countries and languages to its current name. Eventually the pumpkin made its way to Europe where it had an amazing transformation -  the Jack o'Lantern.
The story behind this fiendish creation is an Irish or Celtic myth about a man called 'Stingy Jack', who fell afoul of the Devil himself. Soon the Jack o'Lantern became part of the Halloween tradition, especially here in North America.
www.pumpkinnook.com

1. A pumpkin is technically a fruit and belongs to the same plant family as cucumbers.
2. Pumpkins are 90% water. (does that include pumpkin pie???)
3. Pumpkins were once recommended as a cure for freckles.
4. Pumpkins were once used as a remedy for snake bites.
5. Pumpkins play a role in fairy tales and nursery rhymes.
6. Pumpkins are grown on every continent except for Antarctica.
7. The world's heaviest pumpkin to date was grown in Germany in 2016 and weighed over 2,600 lbs.
www.gardenersnet.com

While some of you are planning your Halloween pumpkin carving, those of us on Garden Island have already done so.Because most of the cottagers leave the island at the end of the Canadian Thanksgiving holiday weekend, one of our traditions is the annual pumpkin carving contest. 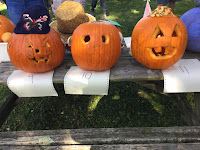 I've written about this event before, but this year's contest included a new activity. Here's the story behind it:
Two years ago, the parents of a five year old boy entered the contest. Unfortunately, to the boy's dismay, they didn't win. It's a contest, right? We adults get that and know that no matter how many entries there are every year, only two winners are picked. The problem was, the prize (besides a plastic, multi-colored and glitzy pumpkin trophy) was a large box of those mini-chocolate bars sold everywhere at Halloween time.That five year old had his eyes on the box throughout the viewing and voting. Yes, there were tears afterwards but some compensation was made  by the winners who shared.
Skip to this year when an imaginative organizer spinned a new twist on the contest. Around the perimeter of the viewing tables hung 3 large pumpkins. 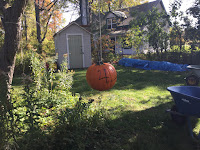 Their bottoms had been skillfully cut and their innards filled with - yes - mini-chocolate bars and all sorts of other candies. Pumpkin pinatas!
Children only were qualified to take a swing with a plastic baseball bat. No one minded not getting chosen to swing (first hand up basis) because the spilled contents belonged to all the kids fast enough to scavenge. And were they fast! Naturally, there was discreet help for the not-so-quick youngsters. 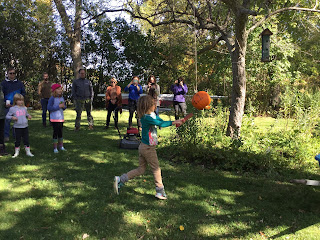 Every year some of the entries recount a story of a happening or event on the island during the summer. This year, the winning entry was this: 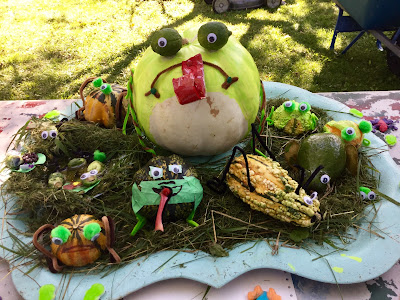 Can you guess what Garden Island happening was the story behind it?
Hint: I referred to it in my September post.