Posted by Catherine Lanigan on October 01, 2019 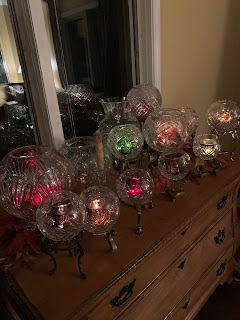 Frankly, this October has rushed up on me/ us like none other I ever, ever remember. What happened to September? Sorry, did we have a summer?  I ‘m so in a muddle between writing, promoting and conjuring new stories, not to mention putting up two bushels of tomatoes into spaghetti sauce for the winter, plumbing problems and well, the list goes one.
I know that a writer’s life is just like everyone else’s---except that we have a WHOLE lot more going on. Right? 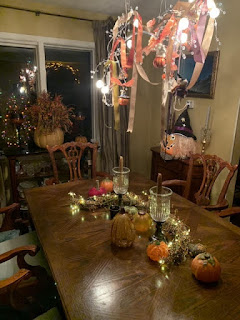 I was at a dinner party last night and there were two other authors there. Of the three of us, I was the most out of whack. Apparently, I was doing three, no four times, more things than they were. For those authors who still have kids at home, I remember those days. NOW, that I’m older, I have not only kids, but grandkids, two new grandnephews on the way. One is due in October. There have been showers, plans for the birth. The baptism. Then another wedding. Another shower, though I hosted one myself  three weeks ago.

And me?  I’d just like to get to the pumpkin patch to get my pumpkins!  In the meantime, I’m sharing here. I couldn’t stand it. I HAD to decorate for the holiday. So,  here are my pics at the moment. 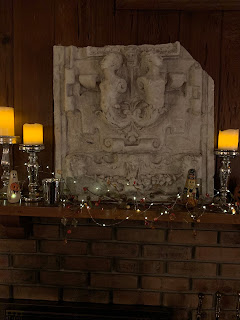 This is the mantle. 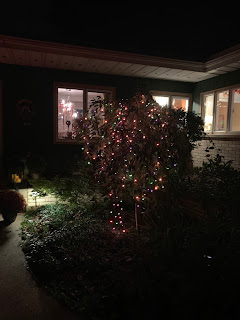 I actually have 2,000 lights in the front yard. I'm not done yet. It's not October officially. 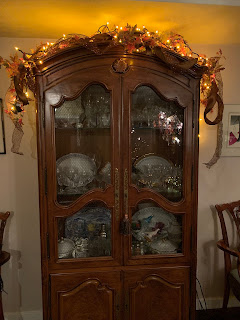 The china. I'm not showing the kitchen with another three hundred or the master with it's garland around the bed and four hundred lights. That's like over the top, right?  Or not.


Some of you may know, or not, that I lived in Quito, Ecuador for over three years. When I was there, in the autumn, which is spring here in the Northern Hemisphere, we went up to a 400 year old resort, which was where the Ecuadorian Declaration of Independence was signed in August of 1809.  In the restaurant each table was centered with these hand made clay CASITA luminarias. They cost six dollars. I hand carried mine back to the US and I’ve had it and two others for over twenty-three years. To me, they are worth millions of golden memories.
In Ecuador, the harvest moon is enormous. The moon is so big, it looks as if it will crush a house. Thus, the Ecuadorian artists have always depicted an Ecuadorian house with a huge partial or full moon over the roof. 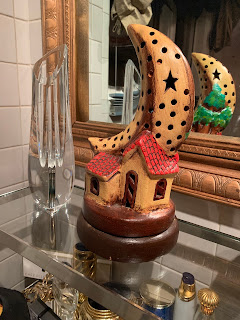 The big pumpkin carving party is coming up end of the month. I have another Halloween party and November is even bigger, because November is the release of my HOME FOR CHRISTMAS!! 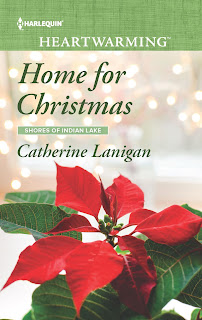 I’m so excited. I’ve been sending out books and getting feedback already. I love, love Christmas. Every single minute. Confession…I SERIOUSLY thought about putting on Christmas music tonight. I know…not EVEN October yet. Right? Sorry, I love, love Christmas. Then I talked to my friend in Los Angeles this afternoon. She’s putting up her tree in two weeks. Okay. I’m not nuts. All the world needs now is Love, Sweet Love.

How about Y’ALL?   How are your plans going?

(Don’t forget you can find both Rula and me on Amazon for our newest releases.  @cathlanigan on Twitter. And www.catherinelanigan.com)


Happy October! Happy Halloween and Joy to you all!
Catherine and Rula