Celebrating my 50th Birthday with miles and smiles by Amie Denman

Posted by Amie Denman on December 12, 2019
I've accused my parents of incorrect math and poor record-keeping because NO WAY am I turning 50 this week. I don't feel 50, I don't act 50, and my generous friends assure me I don't look 50. But the fact remains: I'm from the same year that brought us Woodstock and the moon landing. Instead of fighting it, I'm celebrating!

This week, I ran a Christmas-themed 5K with my husband, sister, brother-in-law, and nephew. Although I have run dozens of races ranging from 5K to a full marathon, it was my husband's first ever 5K. We had a ball in our Santa hats! Here I am with my sister, May Williams, who is also a romance writer. We run together, but we also write together. Our Grand Hotel, Kenyon Cove, and Grand Islander series give us plenty to talk about in our weekly writing/imbibing meetings. 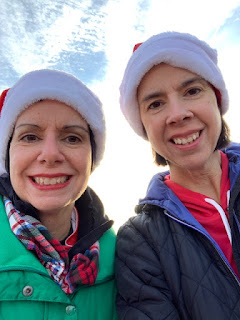 I also got an Instant Pot this week and have made two meals already! I'm not much of a cook (at all, let's be real), but there's something fun about pressure cooking. Maybe it's the gadgetry and potential danger. My successful meals so far were chicken fettucine alfredo and mac and cheese. My picky teenager ate them both after a reassuring cat-test. Not kidding, he slips little pieces of food to both cats who have learned to sit under his chair. If the cats turn up their noses at the food, so does my teenager. I'm sure your families are this weird, too...right? Anyone?

I'm enjoying my first week of being in my fifties, but I'm also pretty excited about the new decade starting soon. It's the '20s again, so let's bring back bathtub gin (can I use my Instant Pot for that?), flapper dresses, elbow-length gloves, and plenty to roar about.