Posted by Virginia McCullough on December 28, 2019

Happy holiday season to all! The New Year is coming around again. Another twelve months to plan and enjoy—and sure to pass in the blink of an eye.

Right before Christmas I finished (yay!) A BRIDGE HOME, book 3 of my Back to Bluestone River series. It ends on the Fourth of July, which means all three books in the series end on a holiday: Thanksgiving (my favorite holiday), Christmas, and now the Fourth of July. I didn’t originally plan these holiday endings, but I’m glad it turned out that way. Ending a story on an important day makes it so easy for me to picture the characters “the day after” as they move ahead with all the changes in their day-to-day lives.

In my latest release, THE CHRISTMAS KISS, wrapping up the romance with a proposal on a snowy Christmas Eve led me to imagine Emma and Parker enjoying a romantic New Year’s Eve. Plus, they had the long winter ahead on Hidden Lake and the beautiful bird sanctuary in the woods. (Romance for these two involves taking care of injured birds, which I realize is not everyone’s idea of a cozy evening.) 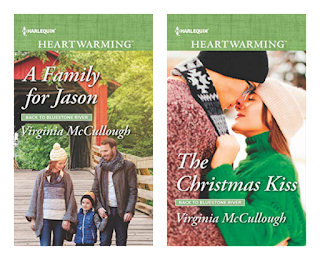 A FAMILY FOR JASON ends on Thanksgiving. Ruby and Mike had just set the date for their wedding, New Year’s Eve at the covered bridge. (Reception indoors, by the way. No shivering in the snow during champagne toasts.) December 31 is a magical, if obviously arbitrary, mark dividing past and future. Sure enough, by the fall opening of THE CHRISTMAS KISS, Ruby and Mike are having a baby, who is a newcomer on the scene in A BRIDGE HOME.

A BRIDGE HOME is filled with new beginnings, and the story appropriately starts in January, when two high school friends, Amy and Eric, have just moved back to Bluestone River and have started new jobs. Amy’s little girl, Cassie, is in her new school—and most unhappy there.  But six months later, newness gave way to firsts. Amy participated in her first cycling race and has an opportunity to own her first business. Cassie made her first new friend, a child new to the school herself. Eric, a school principal, has his first house and says yes to his first chance to become a leader in Bluestone River, along with Amy.

When the story ends on the Fourth of July, I sighed a little over their long summer romance ahead, more new beginnings and firsts. Some days I can’t stop wondering what my Bluestone River friends are up to. And what are they doing for Thanksgiving and New Year’s Eve this year? I realize not everyone understands mulling over the future holiday plans of fictional characters, but I know all of you do.

Have a wonderful 2020. May it be filled with all your heart’s desires!

Virginia loves the characters in her December release, A CHRISTMAS KISS, book 2 of series, BACK TO BLUESTONE RIVER. An author of both fiction and nonfiction books, she’s also a ghostwriter/editor and a coach for other authors at various stages of their careers. Her other Harlequin Heartwarming books include: A FAMILY FOR JASON, GIRL IN THE SPOTLIGHT, SOMETHING TO TREASURE, and LOVE, UNEXPECTED. She also writes award-winning women’s fiction, including THE JACKS OF HER HEART, AMBER LIGHT, ISLAND HEALING, THE JACKS OF HER HEART, and GRETA’S GRACE. All Virginia’s stories people who could be our family, friends, and neighbors. No matter what the books are about, they all explore themes of hope, healing, and plenty of second chances.