Guardians of the heart by Helen DePrima and Liz Flaherty

Posted by Liz Flaherty on January 16, 2020
We're approaching you from a place of loss this week. And celebration, I guess, of lives that have so enriched ours and affected who we are both as people and as writers. We invite you to meet Pam and Danna. - Helen and Liz 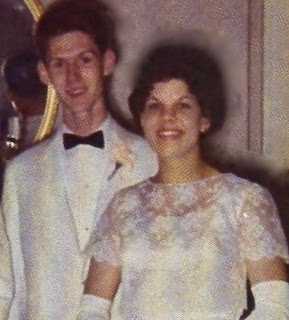 Considering old friends can be a bittersweet experience. I’m deeply grateful for those I’m still lucky enough to have and mourn those I’ve lost.

A year and a half ago, my oldest childhood friend died from the effects of Alzheimer’s, a scourge prevalent in her family. Pam and I had been buddies since the nursery class at Beargrass Christian Church in St. Matthews, Kentucky. We had performed together at Miss Libby Stark’s Dancing School – Pam had a solo as a firefly; I was a little chicken, just part of the flock. I still have the program. We remained close all through high school, in large part because I spent so much time in her mom’s kitchen, perched on a red stepstool and pouring out the adolescent woes I couldn’t share with my own family. Even though we didn’t see much of each other when I left for Colorado and she married out of Louisville, we never lost touch. I loved hearing her voice on the phone as she recounted her latest misadventures. Pam was a perambulating mishap – when she walked into a room, coffee spilled, dishes committed suicide, pictures jumped off the wall. Once, she upset a strawberry milkshake into the air-conditioning duct in a classmate’s car, and she managed in the course of a single evening to sit on my father’s hat just as the bottom fell out of a soft-serve ice cream cone she had handed him. And everyone forgave her because of her sweet smile and loving heart.

Since losing Pam, I’ve promised myself to work harder at maintaining old and valued friendships, some going back as far as nursing school fifty years ago. My one New Year’s resolution is to avoid the regret of waiting too long to say, “Hi – I’ve missed you. Let’s get together.”

"A lovely girl with sunlight in her hair..."

One of my very favorite things about writing for Harlequin Heartwarming and subsequently for the Christmas Town stories is the depth of emotion that is found in the books. I remember writing in a blog once that tenderness was the common thread I sought when I was reading a story. Any story. I've discovered over the years that it's the common thread I seek when I write one, too. If I haven't done some sniffling as well as some laughing as I was writing, I don't feel as if I've done my job.

When I wrote The Happiness Pact, a December 2017 Heartwarming release, I dragged myself and the people whose advice I sought in the writing through the deepest throes of clinical depression in order to depict Libby's struggle as realistically as I could. I remain grateful to author J. C. Kenney for his help.

But I had other help, too. Libby was a stargazer, and I needed a way to work that into her story that I couldn't figure out on my own. Danna Bonfiglio, a friend of my kids from elementary days on and an English teacher at the school they all attended, told me Venus had been her guardian planet when she was a kid. Still was, come to that. During an online conversation, she said, "I used to sing that Frankie Avalon song when I was a kid...if I liked a boy, I would talk to her [Venus] about it. I never told anybody that before. I remember talking a summer astronomy class at IUK, and we looked at Venus through the telescope. I was so excited."

So was I. Venus became Libby's guardian planet, watching over her heart and bringing her through the rough parts.

And there are always rough parts.

Over a year ago, Danna was diagnosed with pulmonary fibrosis. She needed a lung transplant, but her time on earth ran out before it could happen. She passed away January 13. It's as hard losing your kids' friends as it is losing your own--I know that--and yet I was unprepared for how sad this particular loss is. For how I ache for her family and her wife and the kids she taught.

In large part, writers are able to write emotion because they've felt it first or because someone else has somehow given it to them as a gift. My own dance with depression was nowhere near as awful as Libby's, but others were able to relate how it was so that I could soak it up.

When Danna gave me Venus to use in a story and to absorb how much having that guardian planet meant to her, that emotion became a healing agent for Libby's depression. It was a particular stream of tenderness in a tough story to tell. In her 20-some years of teaching, Danna was the guardian of hundreds of young hearts as well as the sharer of information. She had a wide streak of tenderness. She is their guardian yet. She and Venus.