My Kind of Hero.....by Janice Carter

Posted by Janice Carter on January 28, 2020
No, he's not a knight in shining armor. But an anecdote my high school teacher daughter recently told me got me pondering the whole notion of heroes and how we as writers construct them. Even more, how we imagine them.
She'd given her Grade 10 English class a journal writing assignment on courtly love and one student wrote: "The men may even have to joust which could definitely kill a person but worst of all, men may need to write poems." There is so much in that sentence that is both amusing and endearing. I especially liked the phrases "may need" (one hoop of many to leap through to get a lady's love?) and "worst of all" - clearly writing poetry is a fate worse than death. 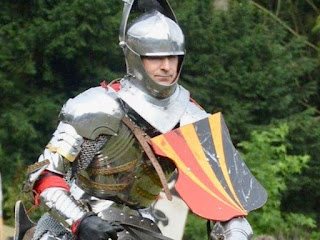 When my laughter died down (I know...can't resist) I began to think about heroes in romance novels, which are surely the quintessential descendants of courtly love, and realized I haven't yet encountered a poetry-writing hero in a romance novel. Though from yesterdays blog post, I know their real-life counterparts are out there...and thanks for that reminder, Patricia Johns!
Then I began to take a look at the heroes in my own romance novels and discovered, to my chagrin, that most of them were a certain type: tall, dark and handsome. Not brooding so much as introspective. Compassionate and empathetic when necessary but not given to transparent communication. In other words, hard to read. That made me wonder when and why did this habit of mine start?
A book I'm currently reading is The Body by Bill Bryson. I highly recommend it for its well-researched and very readable information often presented in an ironic and humorous way. A section I'd just completed dealt with how and why people are attracted to one another (apparently pheromones don't play as large a role in humans as was thought) so obviously this was on my mind too as I mulled over my choice of romantic heroes.
I thought back to my younger days and the kinds of boys and later, men I'd been attracted to. My pre-teen and teen crushes were on actors (Tyrone Power in The Mask of Zorro; James Garner), musicians (Ricky Nelson) and especially, heroes in literature like Heathcliff who were all tall, dark, handsome and slightly mysterious.These were the heroes I had daydreams about, the ones who could see the real 'me' and love me in spite of all my imperfections. And as a teenager, I had plenty.
Funnily though, that type of hero was never the one to capture my interest in real life. My first crush was in Grade One for a boy in my class named Freddy who was very funny. My last big crush in high school was, again, for a boy who was always cracking jokes. Physical appearances didn't count nearly as much as a sense of humor. I was drawn to boys and men who could make me laugh. Of course, as an adult other factors came into play, but humor was always the prime one.
Yet none of the above musing answered my original question: "why do I consistently draw heroes in a certain way when in real life an amusing man is always a magnet for my attention?" Perhaps this tendency has something to do with keeping my characters out of my personal life. It could also be simply that I'm not very good at writing humor. Or maybe the part of me that likes to daydream and fantasize is still solidly rooted in those first adolescent stirrings of romantic interest - my heroes in cinema and literature.
Whatever the answer, I think at some point I'll have to stray out of my comfort zone and create a hero who may not be so good at jousting, but who loves to write poetry.
Do you have a favorite type of hero in fiction...or in real life?

Either way, here's to romance!