Posted by Liz Flaherty on February 20, 2020
by Helen DePrima 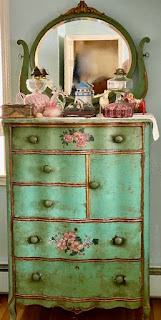 Cleaning out closets is my winter sport, taxing but satisfying. We’ve lived in the same house for forty-five years, and I brought a truckload of family treasures up from Kentucky after my aunt died. At least, I’ve always treasured them, from something as small as an elderly cousin’s recipe for eggnog jotted on a 3 X 5 card to the massive matched dressers my grandmother hand-painted with pink dogwood blossoms. The Anne books my mother and I and my daughter grew up with plus two tiny diaries in which my aunt recorded events like my return from college and the appearance of the first daffodils. My grandmother’s steamer trunk which accompanied her on a jaunt to Europe between the wars and the overnight bag my aunt carried off to training as one of the first female naval officers in WWII. Party dresses from the 20’s and 30’s, now too fragile to wear, and my mother’s gold dancing shoes.

Maybe I set such store by these mementos because I grew up a generation out of sync, 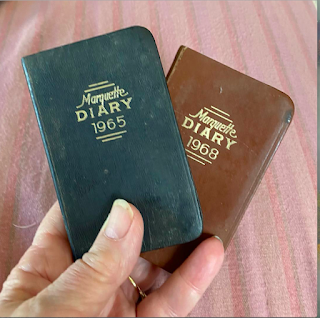 raised by my grandparents and listening to family tales about shenanigans involving pet goats in the kitchen and tragedies like the young bride dead of typhoid on her honeymoon. Now it’s time to pass some of these artifacts on to others who may value them. My great-grandfather’s farm once comprised most of what’s now St. Matthews, Kentucky, so an iron hook from his smokehouse, a wooden spigot from a barrel, and a chestnut planting dibble will go to the local historical society. I’ll pass horse-racing items on to my brother in Lexington who retrains retired Thoroughbreds for new off-track careers, and a distant family connection may want an old spinning wheel which came from her side of the family tree. The memorabilia of aunt’s naval career will go to a young cousin who served as a Marine and married a Navy brat. I’m learning to let go of the physical possessions and instead enjoy knowing they’ll bring pleasure to future generations. I hope. 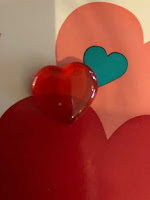 I'm coming in here at the last minute--well, actually after the last minute because I don't have anything ready...including closets. I did clean out a cupboard last week because stuff was falling out on me, but I'm not sure that counts.

After a neighbor passed away in November, I also had a renewal of one of those epiphanous moments. The first time was when my mother-in-law died four years ago this month.

Both of these beloved people in my life lived long, full lives. Five children apiece, more grandchildren than you could shake a stick at.

More stuff than you can imagine. Their long, full lives translated into really, really full houses of...stuff. My husband and I swore we'd get rid of much of ours so that our kids wouldn't have to worry about what to do with it...you know, later. And, to a certain degree, we've done that.

To a greater degree, we haven't. Because my neighbor and our mom loved their things. Every one last item was a memory to them, or a comfort, or something that just looked pretty to their eyes. Again, each thing was something they loved. They didn't CARE what we did with it when they were gone--it was life-giving while they were here.

And there's my epiphany. I've already told my kids that they can get rid of any

and all of the stuff we leave without fear of disappointment and/or reprisal from beyond. The fact that we love it doesn't mean they have to. My girls don't remember learning to sew on the treadle machine in the hallway--I do. They don't remember the dishes from the Grange Hall--I do.

The "stuff" means our lives were rich and full beyond loving and being loved. Although we have very little of monetary value--which I'm more than good with!--I am rich beyond measure. In large part because of family and friends, but in small and important part because of that stuff.