The Magic of Music by Janice Carter

Posted by Janice Carter on February 25, 2020
If you scratched your head or muttered "huh?" at the title of this post and that picture, bear with me. There's a connection, though a personal one for me.
I came across this poster on social media a couple of years ago and saved it, because I found it amusing and ironic. A few days ago it popped up on my personal FB page as one of those memory reminders Facebook randomly sends and yes, I shared it all over again. 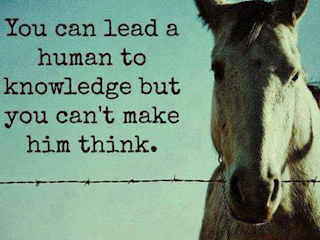 What I like about it - besides the clever reversal of an old adage - is that it always rings true for me. I know its message is simplistic - if only the world could be made better by more thoughtful thinking from humankind - but sometimes basic truths are all that we hapless humans have to fall back on.
Local, national and international crises and situations (along with pressing writing deadlines) have been weighing me down, sucking hope that humans will ever have the wisdom to use their knowledge to think and care about others. So many voices - rights and wrongs on all sides of far too many fences - clamoring for attention! Frankly I was feeling overwhelmed. Even a quick tropical getaway couldn't shift my 'funk' for more than a few days.

So when my husband asked if I wanted to go to a concert he'd read about, my immediate response was a terse "sure." I grudgingly decided to spare the time but was feeling a tad put out, thinking I could also have used the evening to read, jot notes for that deadline or even indulge in some Netflix. But off we went to see and hear a singer/musician from Senegal, Africa - a performer I'd never heard of because my knowledge of music isn't as broad or eclectic as my husband's.
The auditorium of the Aga Khan Museum here in Toronto Ontario was full of all kinds of people of all ages. Some were casually dressed (like me) and some went all out. Many women wore the vibrantly colored gowns and intricately knotted and looped scarfed head wear of their Senegalese culture. A gloomy winter's night has never been so bright or beautiful.
We were all there to see  and listen to the internationally famous Baaba Maal and from the moment he stepped onstage, every person in that audience was uplifted and transported for the next two and a half hours. He dominated the stage in his stunning and voluminous turquoise caftan, which he doffed mid-act, revealing a smaller but no less powerful performer. And when he sang, his rich voice soared into the acoustical folds of the auditorium ceiling and probably, beyond. 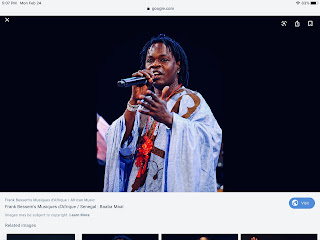 It wasn't long before the audience was clapping, then standing and finally, dancing in the aisles, driven by the energy created by Baaba Maal and his gifted band, especially the drummers. It was a joyful and joyous celebration of music and life itself. The concert was like none other I'd ever attended and much later, when we emerged into a cold but star-lit night, the first thing I said was "thank you."
For those few hours were exactly what I needed and for the first time in weeks, I went to bed without a single anxious thought about a deadline or a world problem I had no control over anyway. All thanks to the magic of music, and especially to the magic of Baaba Maal, a 66 year old singer/musician with a gift.   www,youtube.com/baabamaal
And a postscript - if you ever come to Toronto, visit the Aga Khan Museum for a unique and wonderful experience. Thanks for 'bearing' with me today!