A Trip down Memory Lane by Janice Carter

Posted by Janice Carter on May 26, 2020
I'm slowly accepting that the above is the only trip I'll be making for a long time and for many reasons (besides a mere pandemic) - my age, the economy, lock-downs and closed borders. And I have no qualms about leaping on the bandwagon (nor apparently indulging in cliches) of Covid-blaming - holding the virus to account for many of my current woes, including not fitting into my summer capris.
But I recently scrolled through my photographs looking for inspiration for this post and came upon some from a trip I made nine years ago this past March to Kuwait. It was the first year of my retirement and my father had given me some money to celebrate. My younger daughter was in the second of a four year stint teaching at the American International School in Kuwait City.

My husband had visited her the year previous and now it was my turn. There were other milestones in this trip, too. It was the first time I'd traveled any distance on my own and was my first visit to the Middle East.
After a 6 hour layover in Frankfurt Germany, I eventually arrived in Kuwait City about mid-afternoon the day after leaving my home country, Canada. There was a very long line of people waiting to go through Customs and Immigration and, weary from my 16 plus hours of non-sleep, I almost missed the sign bearing my name and held aloft by a young woman among a small crowd of other sign holders. When I walked over to her, she gestured me to follow and led me out of the line into a room filled with other travelers and local people assisting them.
"Give me your passport," she demanded and though I had no idea what was happening, I was too tired to protest. I sat down with others and watched her head for a counter manned by uniformed personnel. After about ten minutes, she returned with my completed, stamped customs documents and ushered me out the door into the open area of the airport. My daughter was waiting with a big hug on the other side. She'd paid for this service that fast-tracks travelers through Customs and Immigration. This was my introduction to Kuwait and the first indication that money enhances all aspects of life in the country.

Highlights of my trip included:

2. attending a student talent show and a school cultural fair 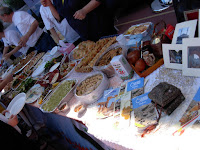 3. browsing in a souk (an enclosed market) and eating fabulous food 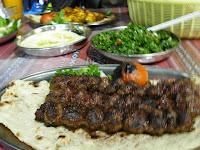 4. flying to Beirut for a weekend and seeing an immense sandstorm from the plane


5. shopping in malls in Kuwait City and Beirut that rivaled the most luxurious ones back home

6. having my first mani-pedi and pampering myself at a club my daughter belonged to (affordable on her teacher's salary there) 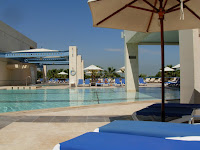 7. meeting my daughter's colleagues and trying my hand at sheesha, smoking a water-pipe (despite my smile, definitely not my thing) 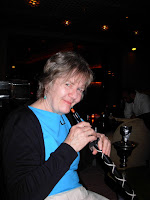 8. hearing the call to prayer 5 times a day, from any place in the city

9. viewing the city from these towers 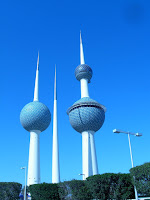 Some random things I learned:

1. my daughter had a cleaning lady for her one bedroom, rent-free apartment! This sweet 40 something woman was from Bangladesh and had been working in Kuwait for 17 years, sending money home to her family whom she only got to visit once a year. This is the plight of most domestic and other workers.

2. the architecture in Kuwait City is ultra-modern and amazing. 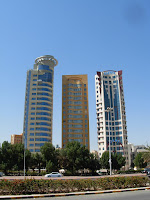 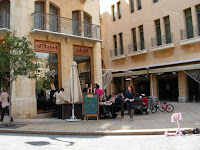 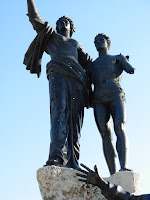 4. because of a city by-law that workers cannot work outside when temperatures reach 50 Celsius (122 F), the official daily temperature never rises above 49 C (according to my daughter)

5. children are the same everywhere - the students loved their treats and the stories I read to them but they really only wanted to know how old I was

I was lucky to travel to a part of the world that, had my daughter not been working there, would never have been on my 'bucket list' of places to see. Thanks to those 10 days nine years ago, I have enough stories and experiences to take a trip down memory lane any time I feel like it.

Do you have a favorite 'trip' memory?

Thanks for joining today and stay well!