A Miracle, not a Flaw with Virginia McCullough


I was heartened by the positive reaction of readers and reviewers to Emma O’Connell, my heroine in A Christmas Kiss (Book 2 in my Back to Bluestone River series). Emma, who’s only 39, has a damaged hip, the result of a fall some years before. Even after corrective surgery, she needs a cane to walk. Emma has almost accepted her relatively minor disability, but she’s occasionally annoyed by it, too. 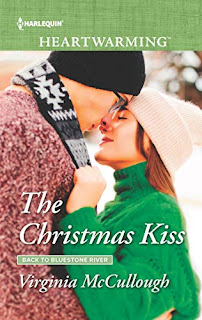 Reader reaction to Emma pleased me in part because after years of struggle and consciousness raising, we’ve seen attitudes about disabilities change dramatically. On the other hand, our society still places a high value on perceived perfection. And we don’t care much for its opposite. Some of this is obvious, like our near obsession with body image. A look at TV commercials illustrates our society’s tendency to want to fix anything perceived as a flaw or a problem. On the other hand, the books we write and read include an increasing number of characters who struggle with various disabilities.

Without being political about this, I’ll simply say we have a candidate for a high office in the U.S., who has struggled with a lifelong speech disorder, stuttering, to be specific. He’s not unlike James Earl Jones, Emily Blount, and King George VI.  And millions more, including me.

So, here’s the deal: The individual in question has a tendency to stop and start sentences in mid-stream. Sometimes he switches topics before he’s completed the previous thought. At least some of the time, he looks like he’s struggling to find words. He’s always had quirky speech tendencies, which were once famously described as “rhetorical flourishes.” Now, mostly because of his age, many no longer see him as a public figure who overcame a potentially debilitating problem. Instead, he’s “losing it.” His speech patterns must be signs of dementia.

Millions are like me. We aren’t classic stutterers. We may never have been diagnosed or labeled as such. No one knows what to make of us. As a child, I could be fluent for paragraphs of speech, but suddenly, words got stuck in the back of my throat. Reading aloud in class was torture. Without warning, I could be talking to a friend or teacher and words piled up and wouldn’t move. What did I do? I stopped in the middle and started a new sentence. If I couldn’t get a certain word out, I just chose another. I still do, and I’m sure I change topics and start over more than I even know. Some of us don’t repeat so much as speak haltingly, maybe repeating one whole word, rather than the opening letter. Or, we sometimes freeze up altogether. In a few years, when I’m as old as the public figure in question, I wonder if people say, “Poor Virginia is losing it.”

Sometimes my terror of doing public presentations was written off as a mere case of “nerves.”  I knew had a serious public speaking phobia, and once out of school I avoided speaking to a group at all costs. But many years ago, I was given the opportunity to present publishing workshops and I said yes before I had a chance to remember that I couldn’t possibly do such a thing. What got me over my terror was more or less a miraculous and instant realization that I didn’t have to become someone else in order to speak. (But that’s another story for another time.)

So, we can like or dislike policy positions and a person’s politics. That’s a given. But when people with speech disorders have the guts to enter public life (or become actors!), or those with dyslexia persevere and write books, or severely injured people have what it takes to move forward and create careers and families, I don’t see flaws, I see determination and role models, and in some cases, great courage. I also see miracles. And I hope you do, too. 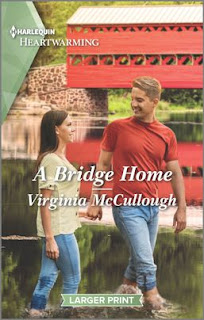 Speaking of miracles, falling in love after an unhappy marriage and divorce seemed like a miracle to Amy Morgan, especially because her marriage damaged her belief in herself.  Eric Wells had a crush on Amy way back in high school, but she never gave him a second look. Both are back in Bluestone River, though, and anything is possible. A Bridge Home (Book 3 of my Back to Bluestone River series) is due for release in August 2020. Bluestone River has had quite a ride from its dismal state of decline to its exciting revival—including a reenergized Fourth of July festival. Romances flourish in Bluestone River as well, and maybe there’s room for one more.
~
Virginia is looking forward to the August 2020 release of A Bridge Home, Book 3 of her Back to Bluestone River series. It opens on Valentine’s Day—and not the best Valentine’s Day of Amy Morgan’s life.  Meanwhile, books 1 & 2 A Family for Jason and The Christmas Kiss are available online and the Harlequin.com website. Virginia’s other Harlequin Heartwarming books include her first series: Girl in the Spotlight, Something to Treasure, and Love, Unexpected.  All Virginia’s romances and women’s fiction titles explore themes of hope, healing, and plenty of second chances.