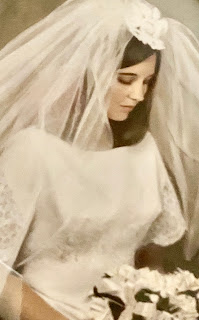 Anyone who claims unsullied bliss in a long marriage is either a saint or a liar – just my opinion. Approaching our fifty-third anniversary in August, I’ve finally concluded that a successful marriage consists of two imperfect people doing their best to create something a little better than one living alone. After the excitement of starting a new life together wears off, the hard work begins. My husband-to-be and I had been inseparable for three years at the University of Colorado and then toughed it through two years of separation while I finished nursing school half a continent away. Even so, we still had a lot of getting-to-know-you to accomplish once the wedding gifts were stowed and the thank-you notes completed.

Carl, bless his Sicilian heart, is bossy and impatient, while I’m lazy and willful. His good points: his utter devotion to family and his over-the-top work ethic during his veterinary career which survives in retirement as he plants and maintains a huge vegetable garden while doing most of the housework when I’m less than able. My virtues (I do have a few): an even temper, the ability to see both sides of an issue, and pride in not being a quitter. Still, surviving as a couple has often been a matter of sheer cussedness, of hanging onto the hope of better times ahead. Maybe, because I grew up with my grandparents, I absorbed their Depression-era philosophy of mending and making do rather than discarding in favor of newer and better.

I never got to see my parents’ marriage in action -- my mother died when I was tiny – but I was always instinctively aware of my grandparents’ devotion until their deaths in their eighties, less than a year apart. She would scold and he would sigh, but love was always close to the surface in a touch, in words of endearment or in small kindnesses. My grandfather always saw her as the beautiful 18-year-old from Indianapolis who defied her parents to elope with the son of a Kentucky potato farmer.
So, my best wishes to all brides, new and old – hanging in is worth the effort. I think.

“A happy marriage is a long conversation which always seems too short.” - Andre Maurois