Sit Down Saturday with Cynthia Thomason

Posted by Cynthia Thomason on June 19, 2020
Hello Everyone,

I am happy to talk about my latest Heartwarming release on this Sit Down Saturday blog post. My editor at Harlequin was delighted with my idea for a trilogy, and this book, A FAMILY MAN AT LAST, is the third book in the series. As is usually the case with the books I write, I just suddenly get an idea and have to run with it. That is what happened with TWINS PLUS ONE, the series I just completed. I asked myself, "What would happen if twin adopted girls, now grown up with loving and supportive parents, suddenly discover that they have a brother three years older that they never knew about?"

In the first two books, BABY MAKES FOUR, and A MAN OF HONOR, each sister falls in love and faces challenges, one of which is to try and locate their brother. A FAMILY MAN AT LAST, is the culmination of their search and introduces Edward, a man who faced a troubled past until he was adopted as a teenager by a judge in the juvenile court. The judge was Edward's rock and salvation and helped Edward grow to be a fine young man. Imagine Edward's shock and sadness when he discovers his father's body floating in the murky water of the Florida Keys.

Edward is determined to solve the mystery of his father's death, and he enlists the help of the county's inexperienced but knowledgeable homicide detective. Monica leads him through the puzzle of solving the crime as well as his unexpected involvement with the two sisters who suddenly show up on his doorstep. Edwards grows to depend on Monica for more than police know-how, and as she helps him, he supports her through a difficult family situation.

I hope you enjoy this excerpt from the book as you picture Monica and Edward growing close under the moonlight in the Florida Keys:

"I've never had much family to bond with," Edward said. "No one has ever been as important in my life as my father was. But that's not saying that someone else couldn't be."
Edward held Monica transfixed with his gaze. His eyes met hers, and in the sparse light it was as if their energy closed the inches that separated them and became one constant, undeniable connection. "You do know what I'm saying, don't you?" he asked, his voice soft and husky.
She did know. The feeling was new and different and as exciting as it was wonderful. Edward made her feel cherished and appreciated. She loved this feeling.
Monica had worked hard to prove that she was determined enough to succeed with her career. But now, in the moonlight with Edward, she felt good about just being herself...a woman for all the right reasons. And someone special in Edward's eyes...

You can purchase this book as well as the first two of the series from any of your favorite e-book sellers. 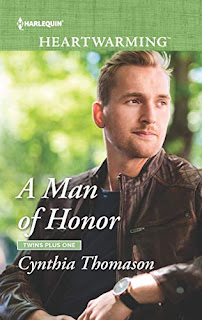 Happy reading, everyone and stay safe in these troubling times. A good, heartwarming book can do wonders!
I'd love to hear from you about TWINS PLUS ONE. You can contact me at
cynthoma@aol.com