A Town in Good Hands by Virginia McCullough

It’s hard to goodbye to Bluestone River, but on the plus side, with the publication of A Bridge Home, I’m leaving the town in good hands. When I started the Bluestone River journey, this picturesque town was going downhill, but it’s on the upswing now, thanks to the return of some former high school classmates, including Mike Abbot, the current mayor. 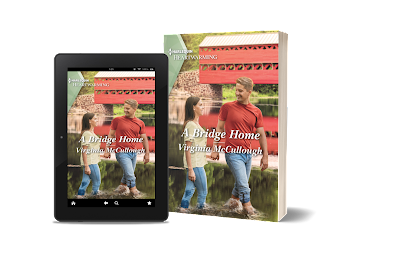 In book 3, A Bridge Home, Eric Wells fulfills his dream of coming back to town to become the principal of Madison School. Amy Morgan finally had to admit defeat and end her bad marriage and return to her grandparents’ home. Amy is determined to build a secure life for her nine-year-old daughter Cassie, while also looking after the elderly grandparents who raised her.

Eric’s father abandoned the family and remained distant and disinterested and broke every promise he ever made. Amy’s parents took off with a scheme of finding a new and exciting place to live and raise Amy. Somehow, her parents never found their way back to her. It’s no wonder Eric and Amy struggle with relationships.

Cassie is angry about leaving behind her school and friends in Chicago, and she still wants to believe her dad’s promises for exciting—and frequent—visits. But Cassie acts out, too, and it isn’t long before Amy finds herself sitting across from Eric in the principal’s office because of Cassie’s disruptive behavior. Back in high school, Eric had a thing for Amy, but she never returned his feelings. Now, Eric is in charge of enforcing the rules Cassie is breaking. On the other hand, Eric knows there’s a fine line between troubled and spunky, and Cassie has already wormed her way into his heart.

When a Valentine’s Day blizzard all but destroys the town’s covered bridge, Amy assumes everyone is behind rebuilding this landmark. But new ideas surface, and Bluestone River is soon mired in controversy. Even Eric isn’t convinced saving the bridge is the best thing for Bluestone River.

As Eric and Amy’s friendship deepens and a romance seems possible, the two find themselves involved in the controversy over what to do with the bridge. Meanwhile, Amy is working hard to revive River Street’s Fourth of July festival. But their biggest challenge is to put their fears and failures behind them and open their hearts to new dreams and the promise of love.

Even more than A Family for Jason and The Christmas Kiss, A Bridge Home is a multigenerational story about the longing for home, family, and lasting love. Maybe at its heart, Amy and Eric’s story is a lesson for all of us in families and communities about the power of overcoming the past and believing in ourselves and each other. 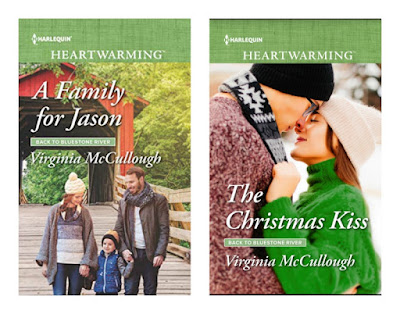 Here’s a snippet from a scene in which Eric has volunteered—again—to lend a hand.  He’s already stepped in to take Cassie and Amy to the Snowball Fair when Cassie’s dad fails to show up. A winter storm gives him another opportunity to help Amy and her grandparents.

While Eric got the snowblower going, Amy shoveled the back stairs and quickly brushed snow off the front porch and stairs. Between the two of them, the place was cleared in about a quarter of the time it usually took Amy by herself. Cassie and Grandma appeared in the front window to watch the snow pile up along the edge of the sidewalk. When he’d stowed his snowblower and the shovel, she led him inside through the back and into the kitchen. Cassie was waiting by the door.

“We hang out in the kitchen a lot, don’t we, Cassie?” Amy remarked. “What can we give Mr. Wells for a treat? We need to say thanks for helping me out.” She went into the living room where Grandma Barb was helping Grandpa out of his chair.

She heard Cassie say, “We’ve got cookies. Want one?”

Eric chuckled. “I’ve never said no to a cookie, if that’s the plan. Will you be joining me at the table?”

“Your teacher told me about your bad cold.” Suddenly, his voice took on a note of disbelief. “What’s this?”

Amy came back into the kitchen to see him grinning and pointing to a photo of Cassie standing next to a snow lady. Amy had anchored it on the refrigerator with a magnet.

“That’s me and Miss Sparkle at the Snowball Fair,” Cassie said. “Remember, we got the Special Mention ribbon and we had burgers and fries.”

“Oh, I do recall that day. As a matter of fact, I have the same picture on my fridge.”

“Yes, really. And I also remember you and your mom feeding an apple to one of the horses.”

“And we saw the parrots.”

“Is that so, lassie,” he said in his pirate accent.

Eric had such an easy way of bantering with Cassie—probably all kids. Cassie didn’t seem nervous or like it was at all unusual for the principal to be in her kitchen recalling the day he’d taken her to the Snowball Fair.

A Bridge Home is now available for your reading pleasure. 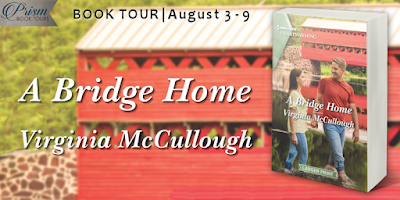 Join Virginia in celebrating the release of A Bridge Home. The blog tour, hosted by Prism Book Tours, runs August 3-9.

Visit Virginia on Facebook for participating bloggers and a chance to win gift cards from Etsy and Amazon.

A Bridge Home marks Virginia McCullough’s sixth book for the Harlequin Heartwarming line. An author of both fiction and nonfiction books, Virginia’s also a ghostwriter/editor and a coach for other authors at various stages of their careers. Her other Harlequin Heartwarming books include her first series: Girl in the Spotlight, Something to Treasure, and Love, Unexpected. She also writes award-winning women’s fiction, including Amber Light, Island Healing, and Greta’s Grace. All Virginia’s stories explore themes of hope, healing, and plenty of second chances.