Posted by Janice Carter on August 08, 2020
Today I'm celebrating the August release of my third Heartwarming, His Saving Grace. The idea for this book and its sequel, The Christmas Promise (January 2021), began in the fall of 2018 like many writing projects, as the germ of an idea. I can't even recall now what prompted the thought, but it had something to do with atonement. I wondered if past shames or guilts needed to be atoned for in order for them to be forgiven. Most of all, if love was possible afterwards. 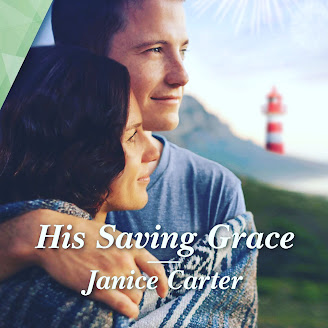 In His Saving Grace, the heroine - Grace Winters - took part in a teenage prank that ended in tragedy and had long-lasting consequences for her and her family. Returning to Lighthouse Cove, Maine, after a long absence, Grace wants to atone for the prank and sets out to restore the town's lighthouse where the tragedy took place. But her plans run aground when Drew Spencer, in his job in the Coast Guard's lighthouse maintenance, arrives in the Cove to decommission and tear down the very object of Grace's endeavor.
Grace has kept her role in the prank 17 years earlier a secret but then she meets and eventually falls in love with Drew. Her dilemma about revealing her past centers on the question - can she confess and still keep Drew's love and respect?
Drew has his own burden of guilt over a judgment call he made when conducting a sea-rescue months ago. Now he works on land, but his chance at a promotion hinges on how effective he is in the temporary position. The problem is, securing his "dream job" means going against Grace Winters and her own dream.
Here's the scene where Drew meets Grace prior to his inspection of the lighthouse that he already knows is set for destruction:
Of course, he'd follow protocol. Ask questions, listen politely and investigate on-site. But perhaps
she'd already figured out that he was going to disappoint her. For some reason that bothered him. He decided to relieve some of the tension he was feeling in the room as he went to the door.
"I heard the place was haunted," he quipped.
A slight gasp caught his attention and he turned around. She ducked her head but not before he got a glimpse of the saddest expression he'd seen in a long time. Drew hesitated, loath to shrug off her unhappiness. But his life-saving days were over and he proceeded out the door.
I loved writing Grace and Drew's story and hope you will love reading it! Thanks for joining today.
His Saving Grace is available in print and digital formats in online bookstores like:
www.amazon.com; www.harlequin.com; www.goodreads.com; www.barnesandnoble.com and you can reach out to me for information about this book or my others at:
janicecarterbooks@gmail.com
Stay well!  Janice Carter